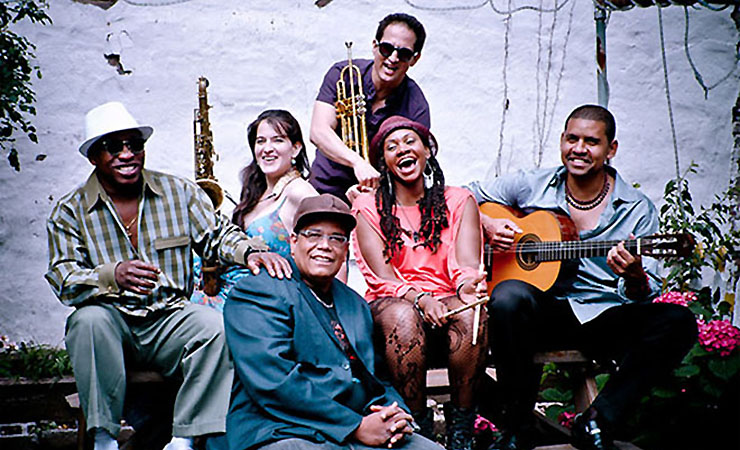 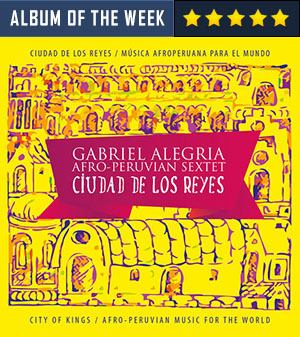 The waves of music break with scorching energy ashore on the known world of music from the city of regal ascension cause ripples far inland, in the mind’s mind. It is there that the sound of the trumpet and the saxophone together with the mighty wallop on the cajón brings sassy Afro-Peruvian music to life again, at the hands of one of the most exciting Latin American groups performing today: Gabriel Alegría’s Afro-Peruvian Sextet. Here is a band that tames even the mighty sun that reins in all its glory across the city of kings; here is the ensemble that mixes music like a mythical painter daubing a mystical canvas with the vivid colours. Once again this exciting ensemble does a star turn as it brings to life the wild and burgeoning rhythm of the Festejo and the stately swagger of the landó. All this on another astounding and sublime album: Ciudad de los Reyes.

What superb melodies with rapidly foaming notes, dancing as if drunk with ecstasy! What glorious whimsy by a trumpet’s high-and mighty and sensuous intertwining with the saxophone of Laura Andrea Leguía and the two musical instruments seem cast in an interminable dance unabashedly caressing each other with melody and harmony. This is something unique and fulsome; a performance that seems endless and completely oblivious of being spied upon by onlookers marvelling at the tenderness of touch in the ecstatic landó “Junio y Garúa”. Mr. Alegría’s flugelhorn virtually entrances the soprano saxophone of Ms. Andrea Leguía in a seminal dance of bewitching beauty. The bass of John Benítez joins in the exotic swirling of bodies as does the guitar of Yuri Juárez; only the percussion colourists are interlopers as the lead instruments cast a web of beguiling music on the ears of the unsuspecting. This is in sharp contrast to the giddying pirouettes and hyper-energetic leaps and gambols of the Festejo that unravels with supreme delight on “La Puertecita”.

This album also marks the coming of age of Laura Andrea Leguía. The saxophonist seems to bask in her newly found confidence as a writer and arranger. Ms. Andrea Leguía contributes six of the charts to this spectacular album and performs with such surefootedness that she seems to wrest some of the leadership in the musical department. Her playing remains powerful and full-blooded, yet she can be extremely graceful and even spectral as she shadows the horn of Mr. Alegría on the haunting version of “Moon River”. It begs mention here, that whenever the Afro-Peruvian sextet undertakes to re-imagine a classic chart from the great American songbook the subtle magic of that chart comes to life as never before. Note “Summertime” from the group’s first album, Nuevo Mundo and “My Favourite Things” from the sophomore Pucusana.

The power and character of the music of this ensemble is largely as a result of the glorious rhythm that comes to life at the hands of such spectacular percussionists as Hugo Alcázar. The drummer shares the spotlight with the stellar Shirazette Tinnin. Moreover the return to the Sextet of the illusive Freddy “Huevito” Lobatón, who provides much of the mighty polyrhythms and the colour that, sits in counterpoint with the melodies and harmonies of the rest of the musicians. It would be remiss not to mention the ingenuity of Yuri Juárez, who has a star turn on “A Lima Llegó El Tondero (Triste)” in a bewitching introduction to the chart that serves as an elementally melancholy first part to the eventual melody. Mr. Juárez’s versatility may also be seen in the previous chart, “Caras II” as he puts aside all gentility for the roar of the electric guitar.

Clearly the Afro-Peruvian Sextet has come a long way from when it burst on the music scene in New York, championed by Bobby Shew. It has now its own voice—or more accurately the voices of Mr. Alegría, Ms. Andrea Leguía and of course Mr. Juárez, Mr. Alcázar, Ms. Tinnin, Mr. Benítez and the great Mr. Lobatón—voices in glorious harmony and fiery rhythm; a band whose time has come to shine like none other.