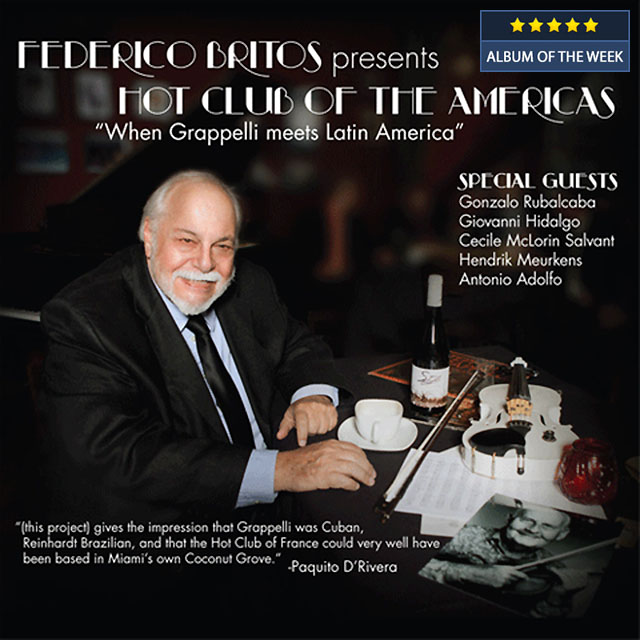 Stories of Stéphane Grappelli meeting anyone in Latin America may be apocryphal but those of Federico Britos doing so are certainly not. Nor is anything odious about any comparison that the Uruguayan maestro has to his legendary counterpart from France. And how can there be anything odd, pretentious or pompous about the title of this album: “Hot Club of the Americas When Grappelli meets Latin America”? After all it is true that either of these two masters could have been anywhere across the world in the spirit. As it is the popular music of the world was their playground, almost as if it was made for the violin—their violins alone. Eddie South, Stuff Smith and Stéphane Grappelli were among the first to revive interest in that music and perform it on the violin in the early part of the 20th century. It did not take long for Federico Britos to follow in their footsteps. While the recordings those violinists from the 20’s, 30’s, 40’s and, in some cases later too, offered powerful advocacy for the violin as an instrument of popular music, some 90 years on, this violinist’s recording has much to offer too. Perhaps the more compelling reason for making an album like this is that you simply cannot stem the rising tide of genius.

Like his predecessors Federico Britos takes the violin out of itself, so to speak, and of a future for it quite beyond string technique. And even when most of these songs were not conceived for a violin, let alone one where the entire focus of the song is on the solo violin, and where most if not all of the songs were not written in the Latin vein, this recording by Mr. Britos proposes a complete violin rethink. He makes the compositions sound as if they were founded on the principle that sounds once generated, can resonate back through the instrument and ought to feel different when that instrumental resonating chamber can be lowered as much as a fourth. But this performance reinforces the idea—for instance—that the diminutive structure of a piece such as “I’m Confessin’ that I Love You”, in what it reveals about the essence of its composers’ art, punches above its weight. A composer once said, “composing means building an instrument,” and as falsetto pizzicatos wilt into airless scraping, bump into the tip of the bow and spew forth ricocheting string vibrations, hit walls of silence and regroup into fleeting harmonic sequences, Mr. Britos’ refinement gives us access-all-areas into the composers’ restyling of the violin as an empiric sound source. Django Reinhardt’s “Melodie en Crepuscule” and “Nuages” refashions foundations bricks and mortar; idiomatic gestures into utterly beautiful shakes, harmonics and perfect glissandos.

“Tears” by both Django and Stéphane Grappelli are soaring and utterly believable. Louis Guglielmi and Edith Piaf’s “La Vie en Rose” with a generous helping of majestic vocalisation from Cecile McLorin Salvant lays upon it a sheet of mysticism, flowing in diaphanous waves as Mr. Britos gets to the core of its rhythmic structure, where the violinist’s fingers are kept busy and each note is delivered with fascinating touch.

Federico began playing violin at age five. Serving as principal chair, soloist, and ultimately Concertmaster with some of the great symphony orchestras of Uruguay, Venezuela, Peru and Cuba, Federico has toured extensively throughout the Americas and Europe. Read more…