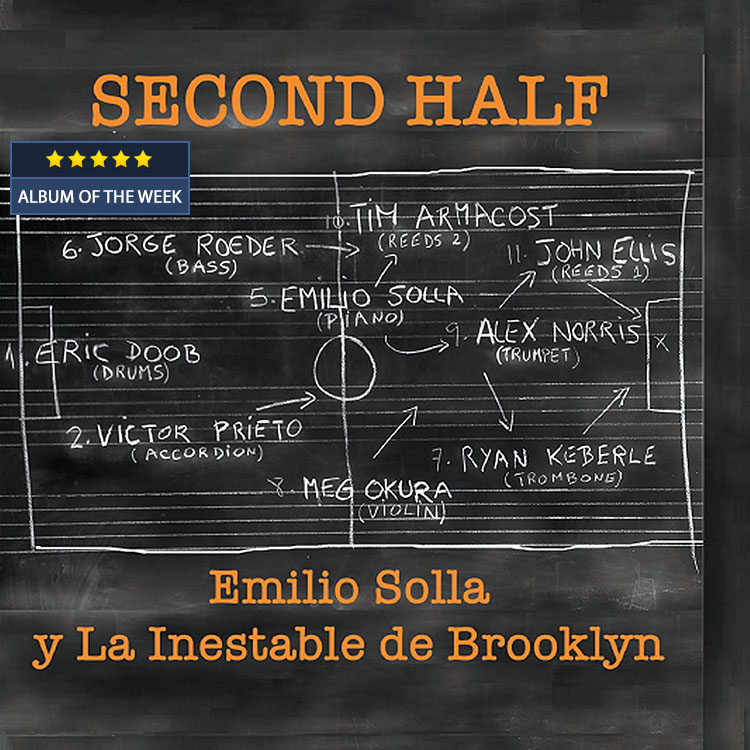 In many ways “great music”—indeed—great art—just seems to “happen.” But artists have also variously described the process as a cataclysmic event that is caused when the electricity of Divine intervention impels the artistic process. Experience would tend to suggest that this is true. However, it is also true that for this to occur the artist must employ a learned technique and the consequent refinement of skill to open a pathway into the soul where the gift of artistic inspiration must be received. Then the soul and the body must be urged to throw a switch in order to complete the artistic/chemical process/reaction. The birth of the idea can now be facilitated. But for this to glow in relative greatness, the work of art must transcend the mundane and seize a refined metaphor en route to a rarefied realm where its “greatness” can be proclaimed. The recording of music—this album Second Half by Emilio Solla Y La Inestable De Brooklyn—suggests that all of the above has taken place.

Emilio Solla, an Argentinean-born pianist and musician has shown that he is ready to catch the artistic train that is making a whistle-stop in the neighborhood of his senses. Why he has employed the metaphor of football—and that too, the second half a game—remains somewhat of a mystery. Is he doffing his proverbial hat to Argentina’s national sport? Is he overlaying the innate game of skill and its strategies for success upon the greater image of the work of art? The propulsive nature of the sport and the music that celebrates it here and the suggestion that ultimately it bodes well for triumph of human endeavour in the ghostly realm of the spirit world might be the point of the idiom of the record. It is a slender connection to make in music, but it is acceptable because the inherent nature of sport is congruent with art. The Greeks celebrated it; so did the Romans and so do the people of the civilization from whence all other civilizations grew. In fact the greatness of the African spirit and also the greatness of the African’s athleticism is celebrated everywhere Jazz is played.

Now, Emilio Solla has captured all of this in his music that soars in a manner that is rarely heard of today. The charts are sophisticated, born of an intellect that is to be admired. And then there is Mr. Solla’s gift for translating all of these impulses into music that is skillfully composed, arranged and brought to fruition by an ensemble that seems to have an uncanny understanding of it. There is no self-aggrandizement and as a result all of the honorific soli are shared in manner that edifies the music and not individual skill and virtuosity. Musical motifs are beautiful throughout and melismas are worked into the charts so organically that they could be nowhere else but when the musicians have chosen to insert them. “Llegará, Llegará, Llegará” and “Suite Piazzollana” are only two of the songs that are performed with sensational beauty on this magnificent album that will, in time, be recognised as an important addition to the library of American music.

Argentina born and NY based pianist Emilio Solla got his degree in Classical Piano at the National Conservatory of Music in Buenos Aires and his MA in Jazz Composition at the Aaron Copland School of Music in New York. He continued to study composition, arranging, counterpoint, improvisation and conducting in Buenos Aires, Barcelona and New York. In 1983 he started to compose and play his own music, a fusion of modern Argentine tango and folk with jazz and other contemporary music styles. His first band, Apertura, was praised by Astor Piazzolla himself as one of the most interesting new sounds in the Buenos Aires scene in 1986. Nowadays, with six CDs as band leader for the prestigious Fresh Sound Records label and concerts and raving reviews all around Europe, Japan, and the US, he is considered one of the most outstanding and personal voices in this musical stream (generally referred to as “tango-jazz”). Read more…