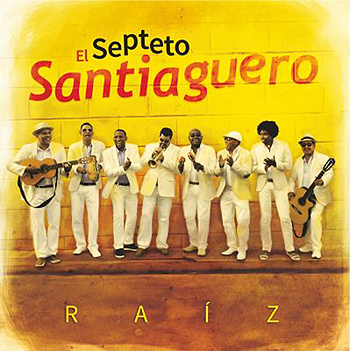 As the footprint and influence of Africa appears to expand into Caribbean and American music, even as the world seems to shrink, we find tradition remains as iridescent no matter whether in the music of David Virelles who ‘sings’ and ‘dances’ at a point seemingly furthest from the sun, or in El Septeto Santiaguero, who bask in all its scorching glory. “Ritmo negro” reigns supreme equally in Gnosis (by the former artist) and in Raíz by the large changeless ensemble El Septeto Santiaguero, aglow with viscerally refreshing son-montuno, son-changüí, danzón… and glorious boleros, served up as few bands playing today can, almost as if the charanga band is reinventing itself with their sweeping music resplendent with horns, reeds and flute, strings and chorus. In fact it often seems as if the golden age of Afro-Cuban music has been reborn yet again seemingly in a universe parallel to our own.

Raíz is easily one of the most ambitiously produced albums to come out of the new Cuba. It is also excellently recorded at EGREM Studios in Havana and is as good as, if not better than anything produced in the United States. It’s hardly possible that this music was produced on a princely budget. However, even a cursory look at the list of musicians who were invited to participate on the recording will indicate that the ensemble did not stint on getting what was necessary to adorn the music with a King’s ransom in artists from both inside and outside Cuba. Searing energy and extreme virtuosity run throughout the more-than hour-long sweep of music, which is brimful of lush orchestral scoring especially in “Si Tú Te Vas”, (featuring masterfully-arranged strings) and “Mosaico #1” and “Ya Se Va Aquella Edad” in which the excellent New Orleans musician and trumpeter, Nicholas Payton, facilitates an effortlessly shifting between dreamy reflection and buoyant bonhomie as one phrase connects seamlessly with the next, interweaving the choral elements into the instrumental like raw silk.

Throughout the sixteen songs Cuba’s expressive music soars from this eloquent performance. Remarkably, while staying close to the traditions of Cuban musical forms there is no gratuitous wallowing in nostalgia. At the same time the harkening back to gentler times is highly evocative. Memorable themes mingle with gorgeous melodies as in “Cristinita” which features Charlie Aponte, “Cuando Canta el Cornetin” with Arturo O’Farrill on piano and “Lágrimas Negras” that resonates ever more powerfully with the voice of the great Rubén Blades. As ever, El Septeto Santiaguero has captured Cuban musical tradition at its most memorable, turning each song on this lush album into an eventful and emotionally eloquent journey for musician and listener alike, from the first bars of “No He Visto a Caridad” taking wing in the brilliant “La Canción de la Trova” and “Cuando Canta el Cornetin” reaching a peak of bittersweet triumph with a bell-like version of “Lágrimas Negras”; which then, refusing to die, carries on for three other songs until the record finally ends with “En Falso”.