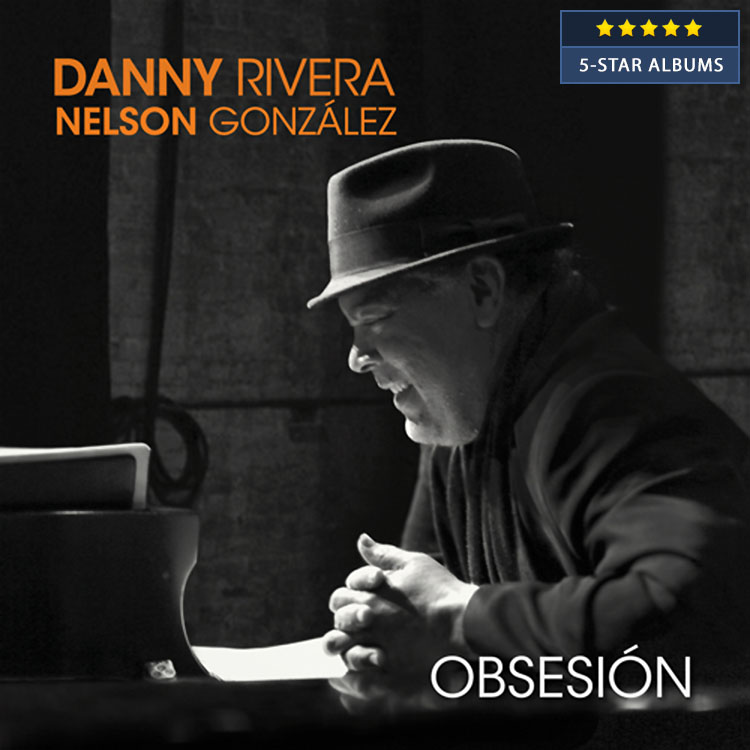 The twisted intrusion of desire can be maddeningly seared into the brain by the power and artistry of the troubadour. This is a dangerous and magical gift for a poet and a musician and something unbearably beautiful for his or her audience. It is duende that twists and tortures the soul. Danny Rivera knows this. And it shows on his recording Obsesión. There is nothing “safe” about this music. It is the music of artists who have been pushed off a cliff, forced to make music on the sheer drop down into possibly nothingness, with the agony of not knowing what lies in store at the bottom of the precipice. On this recording it begins with the unguarded interplay between Mr. Rivera and this tresero, Nelson González. This is a luminous relationship, angled, as it were, like the facets of a diamond wrought by the greatest craftsmanship, honed by the weight of generations of artists from whom important lessons have been learned. However, duende cannot be taught to an artist; it is not learned. It is gifted seemingly when the artists is asleep. And when he awakes, it is there…

Danny Rivera sings with stylistic sureness and radiant personality. The high melismatic passages of the great songs that dot this album form a flawless dialogue between vocalist and instruments. Mr. Rivera conveys passionate authority in “Ausencia” as if his life depended on it… on every last note of the song that is squeezed from the pores of his body and the nebulous vapour of the soul. The crackling flamboyance of the vocalist on “Campanitas de Cristal” is earth-shaking to the extent that the very vibe of the room where the song is heard becomes like an uncontrollable tremor that has a shattering effect on singer and listener alike. The repertoire progresses with sullen power, confirming Mr. Rivera as one of the mightiest proponents of the music of passion. His glistening tenor pours out its libations on the faithful like a high-priest worshipping at the altar of originality. His effortless partnership with the disparate instruments is executed messa di voce in “Franqueza”. He also calmly controls celebratory choruses laden with violin and trumpet so that they are light-footed rather than bombastic. This gifted performance is shared with other artists whose reputation has been sealed by the march of their own history. The Uruguayan violinist Federico Britos is one such accompanist here.

The rest of the cast is no less meaningfully assembled—from bassist Andy González to pianists Chucho Valdés and Arturo O’Farrill, the late percussionist Manny Oquendo and others. The sound of all of this mastery has been captured over the years with absolute beauty by the engineers and production staff to make this recording something to truly cherish. This album has been an obsession for Nelson González and a labour of love he conducted that finally sees the light.

They call Danny Rivera the “the national voice of Puerto Rico,” but his magnificent, passionate way of singing is known and loved all over the Spanish-speaking world. In Latin America, he’s been a familiar face on television since 1968. Over the course of a career that reaches its fiftieth year in 2015, he’s recorded over seventy albums and is the only Puerto Rican to star at Carnegie Hall in four different decades (1979, 1989, 1999, and 2010). Danny Rivera was born of humble origins in one of the deepest Afro-Rican culture zones — Santurce, Puerto Rico, the home of many of the island’s most popular musicians and now part of the modern metropolitan area of San Juan. Born on February 27, 1945 in the neighborhood of 23 abajo, named for one of the stops on a now-defunct trolley line, his first experiences with singing were in the chorus of an evangelical church and in the bars of his neighborhood, and with the barriles (barrel drums) of the street side bomba that is Puerto Rico’s strongest link to the era of plantation slavery. Read more…

Born in Vega Baja, Puerto Rico, Nelson González is distinguished for his mastery of the Cuban Tres guitar. This traditional instrument is indispensable to the interpretation of ‘Son’, the most popular form of Cuban dance music. His love of Afro-Caribbean music developed at an early age and was nurtured in New York City, where he immigrated at the age of 12. During the 1960’s many of today’s acclaimed and virtuoso Latin musicians convened regularly at the home of Andy and Jerry Gonzalez to participate in weekly ‘jam sessions’. Nelson joined these young and notable musicians that included talents such as Dave Valentin, Hilton Ruiz, Oscar Hernandez, Milton Cardona, Nicki Marrero, Tommy Lopez, Jr., Eladio Perez, Charlie Santiago, Papo Vasquez, Orestes Vilato, and the powerful voices of Adalberto Santiago, Willie Garcia, Justo Betancourt and Virgilio Marti. It was during this period that Nelson explored his interest in the Tres. Read more…