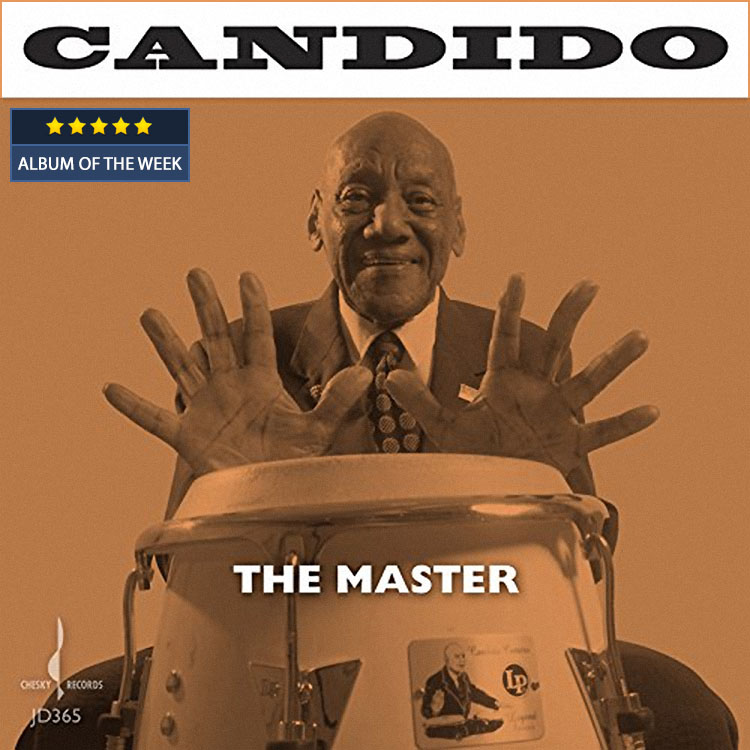 The term “legend” is best reserved for dead people: Buddy Bolden, Charlie Parker, Charles Mingus; and directly from Cuba: Arsenio Rodríguez, Tata Güines, Frank Emilio Flynn… but somehow it seems wholly appropriate to bestow that honoris causa on a small handful of living persons. The great conguero, Candido Camero is one of them. He is a legend not entirely from the manner in which he plays the congas, but what he exudes as a musician: the quintessence—that elemental, fundamentally phantom quality that even few men—even fewer musicians—have. However, it so happens that the 90-plus Candido is, in fact, a musician; a conguero like no other. His attack is angular; almost too soft and caressing. His large hands and long fingers might, on another musician, be forbidding, but on Candido’s they are almost loving; the kind that wrap themselves gently and protectively around an object rather than seize it. This gives him a special sound; one that is soft and virtually whisper-like. As a result the sound that emanates from his set of drums seems to sound like the profound rumbling of the earth as it wakes up from its slumber each time the seasons change, for instance.

The Master is a magnificently produced recording by one of the finest practitioners of audiophile techniques, Chesky Records. The label has set up a new imprint, Binaural Series that incorporates a 3D-sound. All of this would have been adequate to capture Candido’s sound if he indeed existed in the known realm of three dimensions. But Candido adds a spectral, fourth-dimensional quality to his ineffable performances every time he gets his hands on the skins of the drums. His rhythmic angularity is informed by notes that bob and weave; rise and fall like melodies that soar into the emerald beyond. In ensemble passages Candido sounds as if he were playing/uttering almost human sounds complete with voice-like inflections with musical diphthongs that glimmer as they glide off the conga heads. In his soli Candido does all of this and more. He dazzles with his wizardry; he mesmerizes with his cross-talk and the vaunted melodic lines; the rhythmic gymnastics that featured arpeggios, staccatos and ritardandos; slurred notes and virtual crescendos that always transformed the literature of the music he played.

This novel style of playing is the focus of charts as far removed in as the great Ray Santos piece “Conga Descarga” is from the classic “Lágrimas Negras”. This music seems to have been composed almost exclusively for the generous musical spirit that is Candido, who continues to record as well as travel and perform with the energy that belies his 93 years of age. But in his extraordinary youthfulness is the wisdom of the ancients that seems to flow through Candido’s hands and fingers onto his beloved congas. Magnitudine sua in aeternum agnosceretur…

Now in his nineties, LP’s elder statesman Candido Camero touch on congas is still sure, his time is solid and his sound is uniquely his own. Born in 1921 in a Havana barrio called El Cerro, Candido was initially a multi-instrumentalist, showing facility on tres, guitar, and bass-these being key instruments in the popular Son music of the day. A switch to bongos and congas led to a six-year spell with the CMQ Radio Orchestra and a residency at the famed Cabaret Tropicana. Read more…