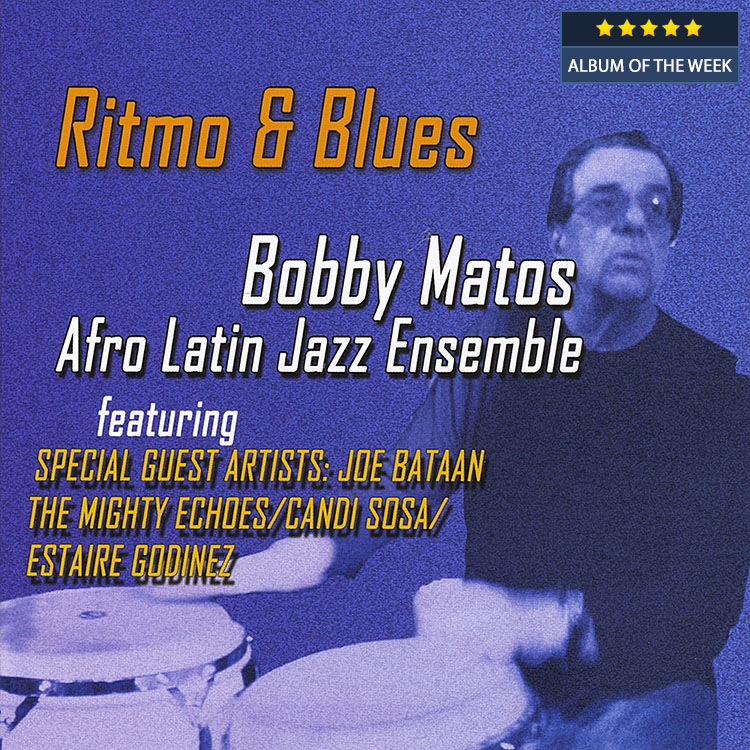 The percussionist Bobby Matos makes a point about the intrinsic connection between Afro Caribbean and Afro-American music. As is evident the African connection is common to both. But there is something more. There has been an almost interminable confluence between New Orleans and the Caribbean. Clave motivates both the idioms of jazz as well as Latin music, that is, it can be heard in the rhythms of jazz and is, of course, front and centre in Afro-Caribbean music. But Mr. Matos does not merely end there, with the pedagogical statement. His music on the 2014 recording, Ritmo & Blues backs up all of this in splendid fashion. Again, it is not merely in the title—a telling one, no doubt—but in every chart on the record.

Mr. Matos is the spine of the record; along with his son, Jud. The elder Mr. Matos is a percussion colourist like few musicians coming out of the Latin-American world. His fingers, from index to pinky, his thumb and its mound and his whole palm are—by turns—all engaged in caressing and thundering across the skins of the congas. His wrist and hand drops firmly and with barely discernably pressure on the timbales and he employs all of his skills on other percussion. He is in total command at all times. His undying love for his instruments is evident in every stroke; every tap, chop and slap that produces a myriad of notes in a variety of accents and with sublime dynamics at all times that the music is played. Mr. Matos’ son, Jud is no slouch either. He accompanies his father as well as the rest of ensemble with splendid empathy and musicianship.

This record, Ritmo & Blues features not only a fine collection of charts, but also a fabulous list of musicians and guest artists, including the superb vocalist, Joe Bataan as well as singers Candi Sosa and Estaire Godinez, and the eponymously named Mighty Echoes. But first the musical collection: The album begins with a sort of fanfare in the form of an a cappella version of “Hey Señorita,” as if to set the tone for a gorgeous programme of music. And then the music begins in right earnest. One of the best selections is “Señor Blues,” which is performed in vocal, as well as instrumental versions. Both are superb in their own way, with Joe Bataan doing the honours in the vocal one. All of the charts are classics and even though some may be minor ones, they are all, nevertheless beautifully played. Again, the vocal arrangements are special and this throws the guest vocalist into a very special limelight. As a result, Candi Sosa on “You Send Me,” the Mighty Echoes on “Lover Boy” and Estaire Godinez on “Unchain My Heart” are among the most special charts on the album.

This, however, does not mean that the instrumental charts are any less memorable and this is why, for good measure, the instrumental version of “Señor Blues” is one of the finest on the recording. This is why this album, Ritmo & Blues is so special to Bobby Matos’ oeuvre as well as to the listeners’ enjoyment of this recording.

Bronx born Bobby Matos began playing music beating on pots and pans in Grandma’s apartment and went on to backstage informal lessons with conga drum masters Patato Valdez and Mongo Santamaria. His first gigs were in the early ˜60’s “beat ‘” bohemian “ Greenwich Village Cafes, but he soon found himself playing in every type of venue; from Bronx dance halls to Carnegie Hall, to elegant supper clubs, Central Park Concerts, Off Broadway theaters, and ˜After Hours” clubs in El Barrio. He was inspired and encouraged to play timbales by Willie Bobo and Tito Puente, and in the late ˜60s attended the New School and Manhattan School of Music studying composition and arranging. Around this exciting time for Latin Music in N.Y., he recorded “My Latin Soul” for Philips Records. This recording eventually became a much prized cult classic influencing many ˜70’s and ˜80’s Acid Jazz groups on both sides of the Atlantic… Read more…