Amhed Mitchel and the Breath of Life Project – Path to Heaven 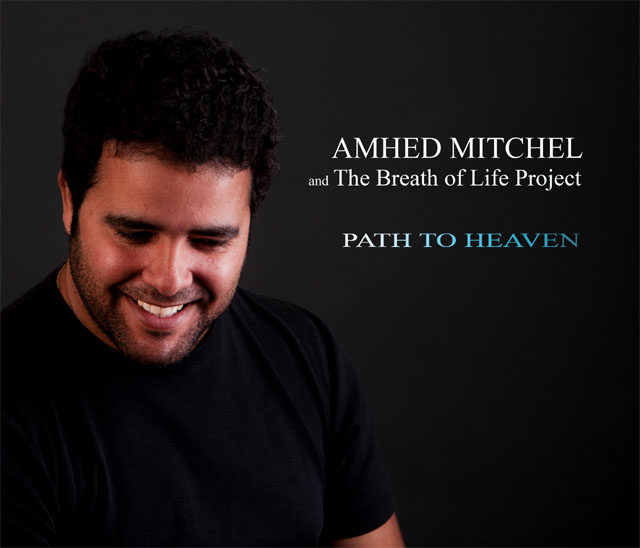 There are few young musicians who embrace their music with as much mysticism as the Cuban-born, Toronto-based drummer Amhed Mitchel. Mr. Mitchel, being Cuban, has a natural tendency towards spirituality, what being surrounded by Santeria, but becoming a part of the Canadian music scene this can very easily fall away in the rush to sound “contemporary”. However Mr. Mitchel appears to be beholden by the Cuban music tradition as much as he is to the idiom of jazz. Moreover, he appears to have been heavily influenced by his father who was himself a well-known musician and like many of his peers deeply spiritual himself. In his debut album Path to Heaven the younger Mitchel shows just how numinous drumming can be in compositions that are soulful; appear to come from a well-spring that is buried inside virtually every artist, but is rarely tapped these days. This is possibly because while it is difficult to stay true to the prompts of the heart it is relatively easy to produce a record, get some airplay by either paying his or her way through the process or developing the right connections. An artist it would appear does not really have to pay his or her dues in much the same way as musical ancestors did.

In this respect, Amhed Mitchel is a rare breed. His music is very mature and of a complex nature. Much of the music is worked out through enormous conflict between the intellect and emotion. There is a seemingly endless push and pull between the head and the heart. Mr. Mitchel is an extraordinarily musically drummer who plays his instrument—a rather dazzling array of snares, timpani and bass, cymbals with delicate variations in timbre—with the cut and thrust of a pianist. His hands are always seemingly light and expressive. He applies a clever array of pressures every time he strikes the skins of the drums. His wrists are exquisitely pliable and it appears that he can roll them in many ways so as the hammer a thunderous series of notes, or caress the skins almost sensuously as he rattles the cymbals with what seems like slaps and splashes. This Mr. Mitchel always appears to be playing melodiously in a manner that an artist would an elaborate keyboard. Inside all of this beautiful playing is heard the spectral mysticism of notes that skitter and sail away into the vanishing point of the topography of the songs. This is heard in the brooding nature of Mr. Mitchel’s rhythmic attack, which is slanted; almost curved rather than vertical. His playing on “Raices” and on “Path to Heaven” is remarkable. It is almost as if Mr. Mitchel were calling to mind all of his ancestors and melding them into the world inhabited by drummers like Jack DeJohnette.

Mr. Mitchel has also surrounded himself with an extraordinary cast of musicians to embark on his Path to Heaven. Chief among them is the bassist Roberto Riverón, a bassist—also from Cuba—who is so soaked in the emotion of Mr. Mitchel’s music that he seems to have a symbiotic relationship with the songs. Mr. Riverón is in masterly form on “Path to Heaven” as he literally “breathes” through his bass. And then there is the small matter of his choice of notes that sometimes dally around the melody, or leap and bobble delightfully as well as with a gravitas that is uniquely rhythmic as well as melodious. The choice of pianists—David Restivo and on “Raices” and “Path to Heaven” the ingenious Hungarian-born Robi Botos—interpret the charts in masterful fashion. The addition of Stan Fomin on “Solarium” is a stroke of genius. Mr. Mitchel also chose well in the saxophones of Luis Denis and Pat Labarbera; as well in the brazen horn of trumpeter Alexander Brown. Guitarist Elmer Ferrer sounds almost like another horn and his playing is full of swing and elegant taste. The prodigious talent of percussion colourist Jorge Luis Torres “Papiosco” is heard on two tracks: “Raices” and on “From Cardenas Matanzas”—too few, but enough to leave a lasting impression on listeners. Perhaps the master strokes in terms of stellar cohorts must be the addition of Mr. Labarbera, who is magnificent on “Close to You” and the accomplished tres player Pablosky Rosales, who is absolutely matchless on “From Cardenas Matanzas”. However, all credit must go to the young Amhed Mitchel who appears to have “arrived” in the grand manner.

Tracks: Reunion; De Pasada; From the Bottom; Raices; Path to Heaven; Solarium; Close to You; Signs; From Cardenas Matanzas.