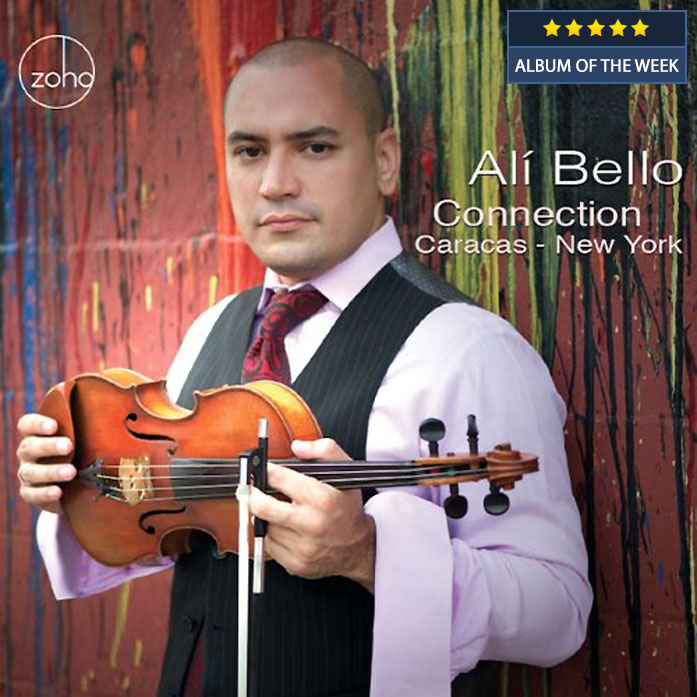 Connection Caracas—New York features the new Alí Bello. Gone is the flamboyance that marked his playing when he auditioned for the You Tube Symphony Orchestra 2011, conducted by Michael Tilson Thomas. The edginess is still there, but the youthful grandiosity has been replaced by a maturity and a seductiveness that is immensely attractive. This is not only reflected in his playing, but also in his outstanding compositions that are featured on a record marked by exquisite playing on the part of a stellar cast of musicians deeply immersed in the wondrous music. And this speaks volumes of the veracity of the record. What recommends the music so completely is the infusion of folkloric material into almost everything that Mr. Bello plays on his violin, with the other instruments following suit; most especially the extraordinary percussionists. But the field is clearly led by the sublimely talented violinist, who is, without doubt one of the most celebrated musicians to emerge from El Sistema, the National System of Youth Orchestras in Venezuela, the other being the incredible young conductor, Gustavo Dudamel.

Alí Bello is a master of his instrument; a player of extraordinary refinement, who seems to suffuse the violin with a powerful electrical charge as he plays it. His intonation is beautiful. It imitates the most primordial of sounds—the cry of an eagle soaring high above the highest mountain; its wail echoing from ridge to ridge and then some. Mr. Bello’s left hand appears to caress the strings stretched taut across the fretless neck and fingerboard of the violin—from chin to root and beyond. But they do not always move slowly. Often his left hand is a blur while his fingers seem to move like the feverishly swishing snakes born of Medusa. At other times they move gracefully as Mr. Bello’s right hand makes his bow cut through the air in mighty arcs; here he causes the phrases and lines of melody to swerve like a procession of beautiful but drunken gazelle. Alí Bello plays like a sorcerer, conjuring vivid images that arise from his music and settle onto a canvas as beautiful and as alive as one by Cristóbal Rojas. The suggestion that Mr. Bello is an old soul is deliberate. His playing surges as if churned from out of a vortex that produced the great classics of the 19th Century. But he is also extremely modern and youthful in his playing and while he brings older folkloric colors and textures into his playing he also propels the music ever forward with each beautiful phrase played in counterpoint to the melody that he creates himself.

Mr. Bello’s record is comprised of some of his most vibrant compositions. They begin with the excited joropo “Amaré,” which features not only exquisite playing by the violinist, but a most memorable tattoo by the percussionist, Neil Ochoa as he announces the song with a remarkably beaten polyrhythmic opening on quitiplás and culo’e puyas. This is followed up by a wonderful contrapuntal passage by violinist and the tenor saxophonist, Javier Olivencia. Mr. Bello’s versatility as a composer is displayed in his ability to switch easily from music that ring with folkloric grandeur, to music that swings with the freedom of the idiom of jazz. For this he has the exquisite hands of bassist Luques Curtis and pianist Luis Perdomo as they launch with the ensemble into a different kind of musical flavour “In G”. However it is clear that the enduring beauty of Alí Bello’s album draws inspiration from his deep roots in Venezuelan folklore and musical artistry. This is not only evident from the music of “Cazón,” but it reaches a crescendo in the remarkable rendition of the plainsong, “Untraveled”. It is here that Alí Bello’s virtuosity as a violinist is clear and unmatched.

However, this record shines not only because of this virtuosity, but truly because of the spirited playing that imbues modern playing with all that is beautiful in the tradition. It is this that sets Alí Bello apart from other young musicians playing music today. Alí Bello is one of a kind.