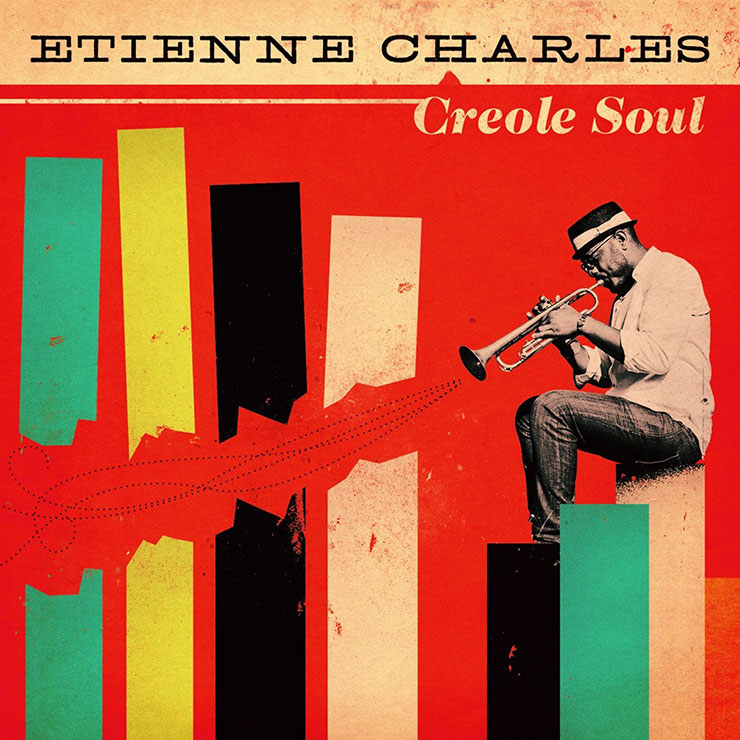 While browsing through the music section of the New York Times I discovered a feature titled, PRESS PLAY. Much like National Public Radio’s FIRST LISTEN, PRESS PLAY debuts new, noteworthy recordings in their entirety at no cost to the listener. Among the recordings was trumpeter, composer Etienne Charles’ most recent recording, CREOLE SOUL.

With my interest piqued I made my way to Etienne’s official website (etiennecharles.com) where I learned there is much more to the talented, 20-something trumpeter than meets the eye. Etienne was born in Trinidad, where he grew up in a musical environment. His great-grandfather played the banjo and the violin; his grandfather played the cuatro (a small, 4-stringed guitar) and recorded with the calypsonian Neville Marcano AKA the Growling Tiger; his father and uncle were members of Phase II Pan Groove, one of the world’s most formidable steel bands. Moreover, Etienne’s lineage can be traced to the French Caribbean by way of Africa, Spain and Venezuela. “I come from a fusion of cultures,” explains Etienne, “that’s what this album is all about: focusing on soul music that is creole at heart.”

“Creole Soul” was conceived in 2010, during a time when Etienne was listening to field recordings from various parts of the Caribbean, the music of Motown, Thelonious Monk and Horace Silver. The end result is 6 original compositions and 4 classic creole tunes that resonate with Etienne on a deep and personal level.

The recording opens with the plaintive cry of a Haitian voodoo chant then plunges into CREOLE, whose driving backbeat is inspired by Etienne’s first encounter with Haiti and the tune, Je Vous Aime Congo (I Love you Congo). The tune is a tour de force for guest guitarist, Alex Wintz.

THE FOLKS paints a musical portrait of Etienne’s parents. Pay particular attention to the musical wizardry of Ken Bowers on Fender Rhodes.

Jamaican reggae singer, Dawn Penn’s classic tune, YOU DON’T LOVE ME NO, NO” was penned by Bo Diddley. The tune originally appeared on Penn’s debut album, NO, NO NO, went to the top of the charts during the 1960s and resurfaced on the charts in 1994.

ROOTS, salutes the island of Martinique by way of haunting vocal chants and the French Caribbean rhythm known as BELAIR.

MEMORIES, was originally recorded by Slinger Francisco AKA the Mighty Sparrow. The tune is dedicated to mentors and icons that have passed. Etienne selected the tune with two individuals in mind: the late, great percussionist Ralph Mc Donald and saxophonist Frank Foster, both of whom were mentors and instrumental in Etienne’s musical development.

Etienne chose Thelonious Monk’s Green Chimney’s as a way of pointing out that Monk was exposed to the sounds of the Caribbean in San Juan Hill, a predominantly poor, working class neighborhood in New York City. The neighborhood was demolished in the 1950’s to make way for the Amsterdam Houses and Lincoln Center.

Etienne and crew interpret Bob Marley’s TURN THE LIGHTS DOWN LOW as a sweet, romantic ballad.

MIDNIGHT is an original composition that speaks to the special time of day when Etienne’s creative powers are at their peak.

The romantic ballad, CLOSE YOUR EYES features a sizzling duet between Etienne and saxophonist, Kris Bowers.

The recording closes with the funky and upbeat, DOING THE THING.

During a recent interview Etienne spoke about the ups and downs of presenting his music before American audiences. “How do you connect with an American audience when you announce that you are about to play a tune by the Mighty Sparrow or Lord Kitchener” asks Etienne? Some people say “Huh?” but a surprising number of people are familiar with Lord Kitchener (AKA Aldwyn Roberts) through his association with Harry Belafonte. “We just play, that’s our job as musicians,” says Etienne, “to advocate for those composers that have passed away and keep their music alive.”

Much to his credit, Etienne also goes out of his way to connect with American audiences through his own experiences and stories. In addition, he believes that “jazz is all about connecting.” “There is nothing like the rapport between a jazz audience and a jazz group,” says Etienne, “because you are sharing an intellectual space, you are sharing a soulful space, a great vibe of in the moment spontaneous creation. There are not many other styles of music that have that.” And speaking of connecting, during a recent performance at Dizzy’s Club Coca-Cola in New York City the audience paid the band the ultimate compliment when they spontaneously jumped out of their seats and formed a conga line.

Etienne holds a Bachelor of Arts degree from Florida State University. In 2008 he received his Master of Music degree from the Juilliard School of Music, where he was awarded the William Schuman Prize. He is also an alumnus of the prestigious Henry Mancini Institute in Los Angeles. In addition to his skills as a musician and composer, Etienne is a producer and an Assistant Professor of Trumpet Studies at Michigan State University.

Etienne has toured the world, including the French and Creole speaking Caribbean territories of Haiti and Guadeloupe with musicians conversant with kompas, racine, biguine, and gwoka. In addition, he has shared the stage with Roberta Flack, Ralph MacDonald, Johnny Mandel, Maria Schneider and the Count Basie Orchestra and the pianists, Monty Alexander and Marcus Roberts among others.

Kudos to the band: Saxophonists Brian Hogans and Jacques Schwarz-Bart, drummer Obed Calvaire, pianist Kris Bowers, bassist Ben Williams and guests, vocalist Erol Josue, percussionists Daniel Sadownick, D’Achee and guitarist Alex Wintz, each and every one a master in his own right and whose soulful approach lays the groundwork for Etienne’s creative concepts.

“Creole Soul” is Etienne’s 4th recording as a leader. It is currently #1 on the Jazz Week radio chart. His previous recordings include “Kaiso” (2011), “Folklore” (2009) and “Culture Shock” (2006). Be sure to check out the band the next time they perform at a performance space in your area. I highly recommend this interesting, enlightening and enjoyable recording.

Etienne Charles on the web: etiennecharles.com | Buy music on: amazon

Previous article
Amanda Ruzza – This Is What Happened
Next article
Michele Rosewoman presents New Yor-Uba: A Musical Celebration of Cuba in America