The Billy Taylor Trio with Candido 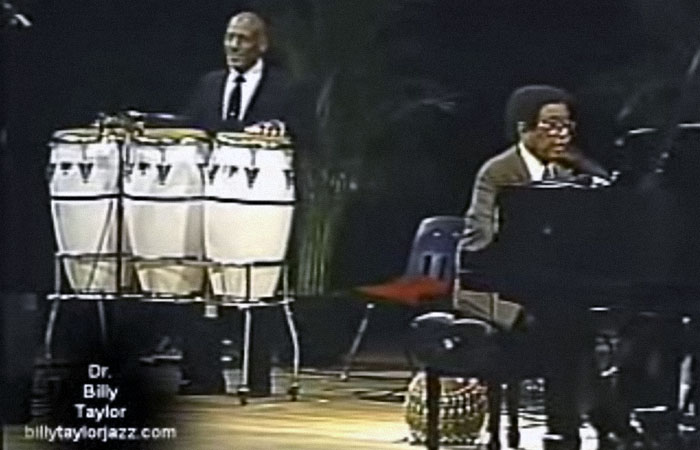 The great Candido Camero moved from Cuba to New York in 1952. The lure of Jazz must have been too strong for the percussionist. Sixty-four years on as it is not difficult to understand why. Although his genius at music featuring Afro-Cuban polyrhythm drove Candido to create an unassailable niche for himself in music, he appears to have a strong affinity for the unique backbeat of jazz. But it gets more unique when you listen to Candido play in a jazz setting. His work in the night clubs of Cuba and with Dizzy Gillespie at Le Downbeat Club show him to have a strong proclivity for Afro-Caribbean and Afro-American rhythms. This is because Candido has an ineffable almost visceral feel for any music that came to earth and settled in Africa before being developed further in the Americas. It seems to come from the pit of his stomach in febrile impulses that can and must be experienced with the heart. Yet somehow it is not possible to explain away his touch in terms of the impulses that arise from within his body and finish with the carving out of rhythms on the congas and bongos. Some of what Candido experiences also have to do with the prompts of his soul—leaping like that of a deer that has caught the spoor of rain. This—and the thundering earthiness of his playing make him a prince among percussionists where once only Chano Pozo held sway. 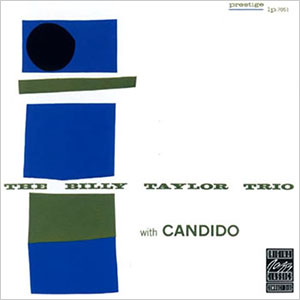 But Candido’s touch is almost mesmerising and sensuous. He does not strike or beat the skins of the drums so much as brush past them seeming not to touch them so much as caress them in the manner of someone peeling off the silken garments off a hot and inviting body. Candido gave notice of this exquisite manner of playing early on in his career. Although there are few recordings from his early days in Cuba, his phenomenal work with Dizzy Gillespie and Chico O’Farrill, and with Machito and the mambo kings of 1950s onwards. But nowhere is Candido featured with such luminous wonder as on this 1954 recording The Billy Taylor Trio with Candido. The enduring quality of the recording—it was captured for posterity by Rudy Van Gelder in Hackensack on September 1954—is largely due to the spotlight that is shone on the conguero/bongosero who is heard chasing the melodies and harmonies of the piano like a drummer possessed. The energetic chattering of the congas and the bongos is spurred on by Billy Taylor’s own percussive pianism. Together they regale the listener with the legendary duels between instruments that became the order of the day whenever went head-to-head in the heat of the clubs or in the studios where jazz was spoken and sung.

This is captured in great measure on this album, The Billy Taylor Trio with Candido. Remarkably, none of this music is written for Candido’s Afro-Cuban chops, but the maestro is heard bringing his almost insane skills as a drummer to American standards such as “Love For Sale.” Elsewhere Candido gives a master-class in Afro-Caribbean drumming on “Bit of Bedlam,” a rollicking piece where the Billy Taylor and Candido chase one another all over the melody. And then there is the almost mad chatter of the bongos on “Different Bells,” a Billy Taylor original with which the set comes to a glorious end, but not before Candido has driven the listener to breathless insanity. The Billy Taylor Trio with Candido is a collector’s classic, not only because of the spectacular music on it, but also because it is the first record to feature Candido upon his arrival in America. These early years and then some are wonderfully detailed on Billy Taylor’s and Ira Gitler’s liner notes that accompany the record.

About Candido: Now in his nineties, LP’s elder statesman Candido Camero touch on congas is still sure, his time is solid and his sound is uniquely his own. Born in 1921 in a Havana barrio called El Cerro, Candido was initially a multi-instrumentalist, showing facility on tres, guitar, and bass-these being key instruments in the popular Son music of the day. A switch to bongos and congas led to a six-year spell with the CMQ Radio Orchestra and a residency at the famed Cabaret Tropicana… Read more…