Few drummers have had such a profound effect on Cuban music as Pancho Quinto. Superlatives are often risqué in music, but suffice it to say that in his case it may even be insufficient to suggest that he is a great drummer and musician. Born Francisco Hernández Mora, Quinto became a regular figure at Cuban religious ceremonies, where his polyrhythmic music was so soulful that he came to acquire the recognised as ‘oma ana’ a term that suggests he became a consecrated drummer at religious rituals and ceremonies. But long before this acceptance occurred, Pancho Quinto grew up in the brutal humility of Havana’s docks.

Working in such surroundings is not something you would normally associate with the rhythm of drums, but it was to be found here as well. But the work environment not only brought him in contact with people with whom he shared a common heritage, but also exposed Quinto to the African call and response, as well as with workers expert in the mysterious and mystical ways of African cultural and religious ceremonies. Here he was drafted into the secrets of ‘Abakua’, a men’s secret society in Cuba, with customs, religions and music derived from the Efik people of Nigeria’s Calabar region. Using his unique experience of this song and dance, Quinto moulded the literature of the chants into a drumming language all his own.

Throughout his life, Pancho Quinto continued to evolve, deeply affecting – and being affected by – the musicians around him. But he never abandoned the music he had made his own: Cuban rumba. Although better known for his debut recording, En El Solar La Cueva Del Humo where Quinto presented a radical fusion of Cuban drumming known as ‘guarapachangueo’ which incorporates batá drums and cajónes into the traditional rumba. During the 80s, Pancho Quinto formed an iconic band, Yoruba Andabo, which notably recorded with Merceditas Valdés, the grand dame of Cuban folkloric and popular music. In the late 90’s the drummer’s profile was raised several notches when he became well known for his 1999 tour of America and Canada with the brilliant soprano saxophonist and flutist Jane Bunnett whose love for Cuba and its musicians earned her the moniker – “Havana Jane”.

In 2003, Pancho Quinto released another iconic recording, Rumba Sin Fronteras. More than any other recording this one defined his style and the stature of this great drummer especially on batá drums and quinto (the solo conga drum played by the master). It is easy to appreciate here why he can be called ‘great’. Magnificent technique, of course; the trickiest passages seem like child’s play in his hands and Rumba Sin Fronteras is full of this. But what impresses most is Quinto’s musicianship. He is able to make the listener aware of the emotional import of each phrase, apparently spontaneously, as though he’s only just considered playing it that way. Take the way he introduces the album with “La Gorra” and continues on, song by song, ultimately closing this unique album with “Cuando baila Cachita”. 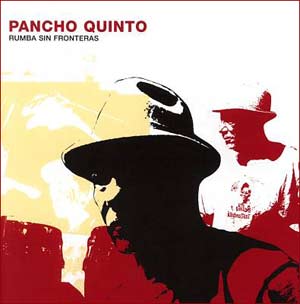 Every piece bristles with genius often with delicate variations of sound. On each occasion Quinto is able to find a new tone-colour, a new timbre and a different touch of subtle attack. In his hands, and really because of them, the music becomes a living thing; once senses that this is true of each song here, which has individual character. In fact, it might be said and astute listeners will hear this immediately – how much Quinto values musical character over sheer brilliance. Although brilliant every time he solos, phrasing is paramount and Quinto employs this in a lively manner (“Caridad” and “Water Please”) to capture the full character of folk-inspired episodes while always avoiding exaggerations and caricatures. Similarly he embraces the music’s playfulness and its omnipresent moments of lyricism.

At this stage in his career, long after he had made a name for himself, Pancho Quinto’s youth remained a hallmark of his playing, so much so that he often even challenged some staid and stilted traditional ways of playing music, infusing jazz – even hip-hop – into his playing. But largely he remained true to ‘abakua’ texts, making wonderful embellishments, transpositions and variations that are so subtle, but that dazzle even the most non-tuned ear. Only Tata Güines perhaps played like this. And yet on this recording, it seems that Pancho Quinto is without peer. HIS extraordinary communicative manner is something to be treasured by new generations of drummers and listeners alike.

Pancho Quinto is a master of the bata, the Yoruba ceremonial drum, as well as of the quinto, the lead drum used in the rumba, which has its roots in the Cross River Delta among the Efik and the Efo. Interviewed on his ’98 tour to the US, Pancho said: ” I play a polyrhythmic rumba. I never go outside the Cuban rumba, and I play that perfectly, but I add to it, as if I had a whole drum set in my hands. And I play many instruments, like cajon [wooden box], bata, and bells.” Recent album: “En el Solar la Cueva del Humo,” with Round World. Read more…