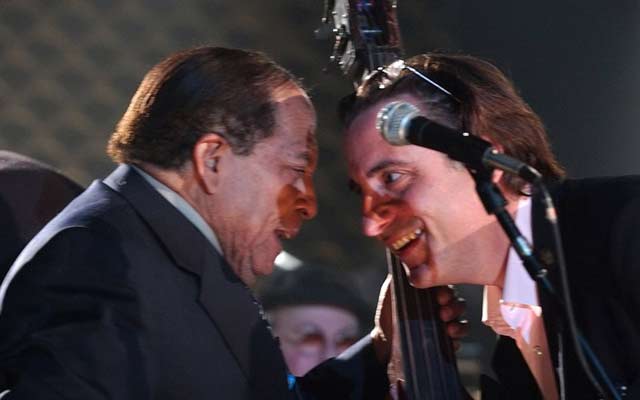 Israel “Cachao” López is one of those larger-than-life figures, a monumental Cuban musician. Although not as famous as Bebo Valdés, he was still one of Cuba’s premier bassists and is credited with two critical aspects of modern Cuban music. In the late 1930’s Cachao and his elder brother Orestes López began using African-rooted rhythms in their music and this came to be called nuevo ritmo which turned the popular Cuban danzón into what came to be known as the “mambo”. Cachao was also fond of gathering the finest musicians in Cuba to play in what came to be known as “descargas” and in 1957 these Cuban jams of descargas were forever immortalised on a record that Cachao produced, called Cuban Jam Sessions in Miniature (Panart, 1957). 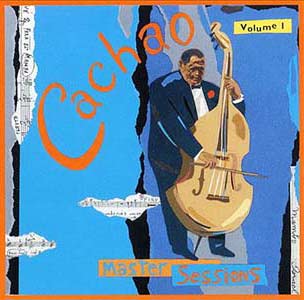 In 1961, Cachao went into exile in Spain enjoying an active career until the band he was playing in broke up in 1963. The bassist left for the United States, settling down in New York City where he enjoyed a flourishing career as a bassist with prominent bands. He was especially known for his work with Machito and later became the bassist for one of the most famous bands that Candido had put together. But it was Rene López who once he became Cachao’s producer guided the bassist’s career to stellar heights until he moved to Miami, where Cachao’s burgeoning career once again faded away. To survive Cachao had to play wedding gigs and subsisted on other gigs in sleezy clubs at the height of Miami’s “Vice Days”. These two decades (from the 70’s to the 90’s) came to be the lost decades of Cachao, once hailed as the finest that Cuba had ever produced.

It was the actor and musician Andy Garcia who happened to discover him playing a small club; he brought this to the attention of Emilio Estefan and an idea to bring back the glory days for Cachao was born. Mr. Garcia came up with the idea of bringing the best of Cuba’s musicians living in exile as well as other important Latin American musicians and the Master Sessions was born. This idea was sold to the Epic label and the first of these monumental descargas was committed to tape in 1994. Andy Garcia brought together musicians such as Paquito D’Rivera, Francisco Aguabella, Alfredo “Chocolate” Armenteros and Lázaro Galarraga to play on one of the finest, most explosive descargas ever put down on record. On the programme was some classic fare including “Al fin te vi” a short but memorable duet with Paquito D’Rivera. 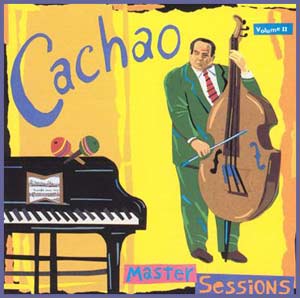 The tapes kept rolling and the music kept flowing from Cachao’s bass, casting an infectious spell on the rest of the musicians. In fact so huge was the programme that it could not be fitted on one disc. The Master Sessions Volume II finally saw the light of day in 1995. The highlight of the second volume of the Master Sessions – which begins with another spectacular duet between Cachao and Paquito D’Rivera – is Cachao’s “Africa Suite” which begins with a primordial Yorubà chant. The second piece in the suite is one of Cachao’s classic danzón entitled “Africa Viva”. Parts 3 and 4 are long descargas that form the pinnacle of this volume.

Master Sessions is one of the most electrifying records that Cachao has made ostensibly in the sunset of his career. The array of music that is on these two volumes including some of the finest and most spirited descargas is unparalleled. Despite the fact that Cachao had recorded many an album in a long career that began in Cuba in the 1930’s and ended in Miami in 2011 with The Last Mambo, it is almost certain that the Master Sessions will remain one of the most beloved by die-hard fans of Israel “Cachao” López. The entire Master Sessions project was subject of the documentary “Como Su Ritmo No Hay Dos” also produced by Andy Garcia, who in 2014 followed this up with a short film entitled “Mi Maestro”.

Cachao was born on September 14, 1918 in Belén, a neighbourhood in Old Havana, into a family of musicians, many of them bassists—around 40 or more in his extended family. He was born and raised in the same house in which José Martí was born.As an 8-year-old bongo player, he joined a children’s septet that included a future famous singer and bandleader, Roberto Faz. A year later, already on double bass, he provided music for silent movies in his neighborhood theater, in the company of a pianist who would become a true superstar, the great cabaret performer Ignacio Villa, known as Bola de Nieve. Read more…