Art Blakey And His Jazz Messengers With Sabu: Cu-Bop 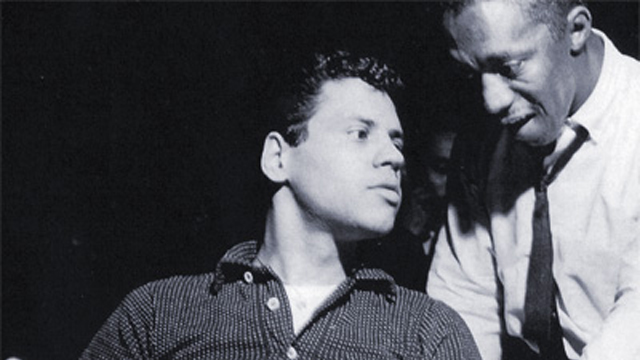 It is curious thing that this album is listed in very few biographical notes about the Jazz Messengers. Perhaps it is a small matter in the greater scheme of things as far as The Jazz Messengers go. But this group was the second incarnation of the legendary group led by Art Blakey. Still, the fact that even Raúl Fernández does not even mention it in Latin Jazz: (The Perfect Combination) is more than plainly curious. There may be a school of thought that it is less Latin-Jazz than other recordings by someone like Machito and Tito Puente may have recorded during the same period. This kind of talk (and I have heard it in rather vaunted company) is hogwash to say the least. Cu-Bop is an album with a very real and visceral rhythmic excitement. To listen to the string of solos on “Sakeena” is something to die for. It is an 11-minute song. Still, I could listen to it over and over again. The exchanges between Mr. Blakey and his guest, Luis “Sabu” Martinez, are riveting. But The Jazz Messengers are making more than just considerably joyous music. 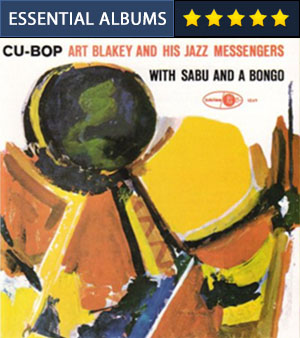 There is an enigmatic relationship between melodists and harmonists than is obvious at first listen. There is this matter of tonality and even when the language is more linear and austere and there are very few parts where this is so – in Charlie Shavers’ “Dawn on the Desert”. What might become a dry piece is lifted off the page by the passionate advocacy of The Jazz Messengers, who bring tonal refinement to the music here. Refined elements are somewhat lost on the album by the presence of two strong percussionists who would appear to overpower the proceedings. Happily, this does not happen too often. Johnny Griffin and Bill Hardman ensure that every time the spotlight is on the percussionists they retreat into the shadows, but not for long. Elementally beautiful soli by the two interlocutors keep the rhythm of the desert caravan beautifully on Mr. Shavers’ extraordinarily-written piece. Contrapuntal writing always gives way to something more free-flowing and lyrical, and a wider range of sonorities. An outstanding muted solo by Mr. Hardman speaks a language more tonally based, with repetitive rhythmic phrases based around drones which, in turn, sounds quite oriental. Much of the allure, overall, comes from the controlled, spacious performances that rise and fall in ecstatic modal lines.

This is a beautiful album, albeit the fact that it is a mere 35 minutes and 45 seconds long. From the point of view of the history of The Jazz Messengers it represents an important document in the second Jazz Messengers after the “original” Jazz Messengers began recording in 1954, under Art Blakey’s leadership. More than historic relevance, however, this is a joyous recording and well worth exploring whether you are a Jazz Messengers acolyte or just plain curious. No matter who you are, the recording will mesmerise you in its own sweet way.

Track List: Woodyn’ You; Sakeena; Shorty; Dawn On The Desert.

For a brief period in 1956 Donald Byrd stayed on as a new lineup was formed. It included Kenny Drew, Wilbur Ware, Ira Sullivan playing tenor sax in place of his more familiar trumpet. The only contemporary documentation of this version of the Messengers was two tracks backing up singer Rita Reys on The Cool Voice of Rita Reys on Columbia.

Blakey then formed a new lineup that would prove to be much more stable. The most notable name, at the time, was Jackie McLean. He was only 25, but had already recorded with Miles Davis and Charles Mingus. Bill Hardman, Sam Dockery and Jimmy “Spanky” DeBrest filled out the group.