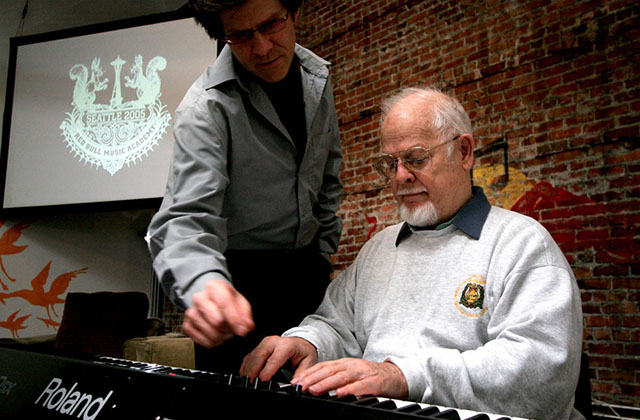 It might not be expedient to suggest that Clare Fischer is responsible defining what Big Bands should sound like. Duke Ellington did that. Nor did he take musical drama and Duke Ellington’s concepts to a new level. Charles Mingus did that. But it would be remiss not to acknowledge that Mr. Fischer was masterful and intuitive in his approach to music as he melted the musical horizon, then blurring it so a plethora of musical dialects informed his music. He dipped his sonic brush into a palette so infinite that he woke up the world to beautiful musical colours. With good reason. Clare Fischer gave new meaning to the term multi-instrumentalist. No musician was so masterful on so many instruments and as a result almost no one could write so beautifully for the instruments that comprised a big band. This is what made him so special. And how beautifully this shows on his records! And there is new reason to celebrate: Pacific Jazz a wonderful new collection of music—some of which is performed by the master himself—is out. And not soon enough, lest we forget Clare Fischer, his son, Brent Fischer is keeping his father’s legacy alive. 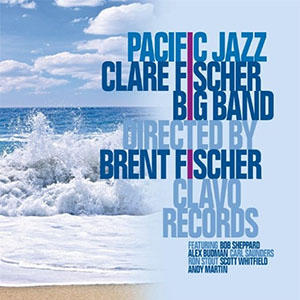 It must be said that Brent Fischer’s role in much of Clare Fischer’s late period should not be diminished. He learned very early at the feet of the master and his hand also shows in this wonderful album of music. He has as much to do with this sweeping symphonic sound as his father does. True, Clare Fisher defined his sound with a brush so broad and yet so characteristically singular that no one could replicate it and his unique sound. The elder Mr. Fischer used innovative keys as he wrote and melded uniquely disparate keys as well. His use of time signatures was full of surprises. Mr. Fischer all but created a new grammar for the language of big bands. Listening to “Cherokee,” the very first chart on this recording, the unexpected changes in tempo make for a new and exciting dramaturgy in Ray Noble’s old classic. Mr. Fischer’s mix of time signatures makes this one of the finest big band arrangements of the song. Duke Ellington’s “Cotton Tail” is also reworked imaginatively as is “Mood Indigo,” which features the great one playing majestically on a superbly tuned grand piano. Here there is something almost mystical about the performance as well as the softness of the brass and the winds create a work of exceeding and ethereal beauty. Meanwhile the younger Fischer has created a fitting tribute to the one from whom the most telling and emotional lessons were learnt. “Son of a Dad” is simply touching and beautifully crafted. This and the overall production of the album are among the grandest tributes that any father could hope for from a son.

Clare Fischer as also one of the greatest champions of the electronic keyboard. The longer sustain of sound made it an instrument that meant very much to the composer and performer. His recording of “I Loves You Porgy” is one of those performances that bears testament to this. The performance here is bright and immediate. The elegance of Mr. Fischer’s playing is masterful in its feature-length solo. The pianist’s polished technique is in evidence here. His strong sense of colouration and close attention to dynamics and phrasing create a compelling impression and in the end the performance is truly expressive. No Clare Fischer record, no matter what the size of the ensemble, is complete without something never heard before. This album does not disappoint either. “Ornithardy” is that reason why, for this is a piece that is sparkling and soaring. The big band’s performances on the outer parts of the piece combine brilliant juxtaposition of light and shade with a sense of unrestrained enjoyment. A fitting end to another wonderful Clare Fisher album.