Chembo Corniel: Things I Wanted To Do

There is nothing like a swinging, stomping Latin-Jazz record laden with sensuous clave and robust horns and relentless, driving percussion to stir the senses. And this is exactly what Wilson Chembo Corniel brings to life with Things I Wanted To Do. And this is also one more step in the journey for Corniel on his way to join the rarified space occupied by the likes of Tata Güines, Pancho Quinto, Long John Oliva and many others. Much of this has to do not just with Corniel’s wonderful abilities as percussionist, but also because of his ability to make music with his cohorts which is new and memorable. 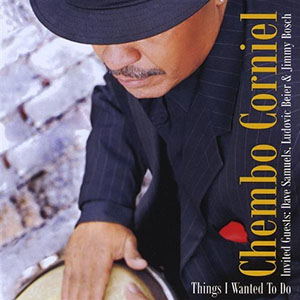 Chembo Corniel is a mature artist and a fine, tasteful percussionist. His style may not be flamboyant, but he has this great depth as a musician. And as a punisher of the skins he is extremely intelligent. Corniel also understands not just clave, but pulse and dynamics. His work is inspired by living color and myriad timbral texture – as much as the mind can imagine. He often shows controlled passion and he certainly has a deep understanding of the metaphors and phrasing of music – no matter what dialect he sings in – Afro-Cuban or jazz. This is what makes his percussion work almost vocal. He rides his congas like a master who can tame even the wildest skins. His work on the smallest Batá (Okónkolo) together with Pedro Martinez and Ogduardo Roman Diaz, who play (Itótele and Iyá Batás, respectively) is highly spiritual and authentic. Together these percussionists – especially on “Oru Pa Tommy Lopez” is especially heartwarming as Corniel, Martinez and Diaz return the drum to its deep sacred voicing.

On Things I Wanted To Do Chembo Corniel makes short work of the exuberance of Latin American music. He swings from flamboyant to thoughtful and extreme virtuosity on “The Sultan,” a track that the great Marty Sheller wrote with him in mind. The restraint here is admirable. And this stands him in good stead as he leads from the front. And this is a powerful quintet that he leads. The group includes Iván Renta on tenor and soprano saxophones who is especially memorable on “Tenia Que Ser Asi.” Then there is Vince Cherico, who brings that hard edge and filigreed drumming approach to the music. Pianist Elio Villafranca is outstanding throughout this recording. Villafranca, not only a soloist with a voice of his own is fast becoming a first-call sessions pianist and he is highly adept at eschewing the flash and showmanship that comes so easily to many pianists these days, replacing this with feeling and emotion instead. There is ample evidence of this especially on the extraordinary “Isla Verde.” And bassist, Carlos DeRosa is solid as a rock!

Things I Wanted To Do showcases all of the group’s formal rhythmic structures from cha-cha to classic son and rumba, with “Oru Pa Tommy Lopez” being a beautifully pure ritualistic percussion ensemble conversation with God. But there is also a spectacular array of music here. For instance Chembo Corniel stretches wonderfully on Ludovic Beier’s “Swing Street,” a track on which Beier’s accordion adds a superb harmonic twist to the ensemble sound. “Descarga Patato” and “The Sultan” are also tremendous vehicles for Corniel. “Fantasma,” although somewhat dark in tone is bewitching and beguiling and is riveting as it progresses languorously towards its denouement.

This record is also marked by several fine performances by its guest musicians. Frank Fontaine, who guests on “Descarga Patato”, is superb on flute alongside Jimmy Bosch, who growls his way on trombone. This may not be a typically rocking Latin record, but it is thoughtful and majestic and marks another giant step for Chembo Corniel in the world of Latin music.