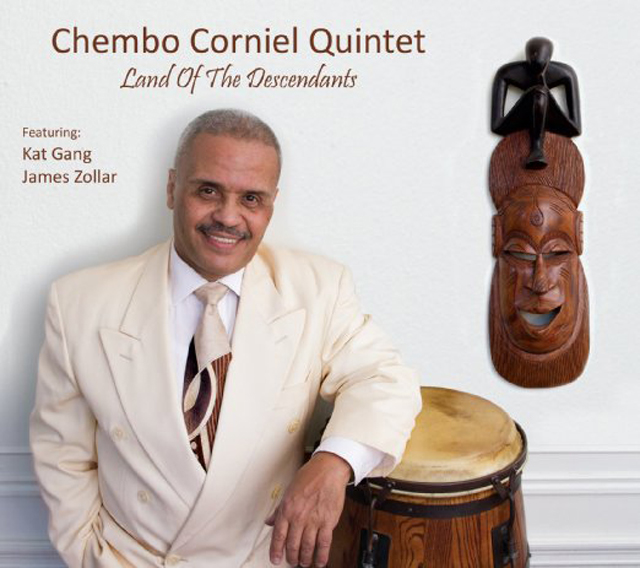 It would be downright foolish to assume that just because Chembo Corniel fronts the quintet this album, that it is just another Latin-Jazz album. On the contrary, it is a very sophisticated album and profoundly animated for its entire 48 minute length. Moreover, it proves, once again that Corniel, a percussionist of devastating charm and talent is more than a rhythmist. He is willing to push the envelope, explore tonal and textural realms with a child-like sense of adventure. He is a disarming performer who certainly pays tribute to his cultural background but is not averse to probing the atmospheres and aromas of the land around him, embracing elements from assorted cultures.

This is what makes Land Of The Descendants so transformative. It is an album full of exultant asymmetrical rhythms and harmonic pungencies. Throughout, Corniel, a superb master of ceremonies is unafraid to take the music into unchartered territories also giving the musicians in his ensemble quite a free rein to go where the music takes them. This is why the music abounds in fresh gestures drawn from various enchanted inspirations. Of course it also helps that the musicians in question include the great emerging talents: the Nicaraguan pianist Darwin Noguera, the trumpeter James Zollar who comes to the music in a mighty blast of wind and the glorious vocal talent Kat Gang, who voices Billy Strayhorn’s ‘Lush Life’ as you may have never heard before.

Of course the magic wand of Chembo Corniel is all over this music. He is a brilliant amalgam of Latin folksong, the improvisational aspects of jazz and more, all rolled into a showcase for his expressive sound and acrobatic chops. The Chembo Corniel Quintet is also blessed to have as its woodwinds/reed player, Frank Fontaine, who shapes the melodies with a physical and emotional intensity and a beautiful warm glow. There is never a false note throughout Fontaine’s playing and this is probably why all it takes are his horns to provide the album with a chamber-like sound.

Wilson ‘Chembo’ Corniel’s discography as leader may be thin compared with that of other percussionists in: Latin-Jazz. But it is memorable and potent and quite impossible to put out of mind when you have experienced it even for the first time. Small wonder why Corniel is one of the first call percussionists in the Latin-Jazz scene – certainly on the entire Eastern seaboard of the United States. This album is proof of many things, chief among them that Corniel’s is a voice that simply cannot be ignored.