Carlos Franzetti: In the Key of Tango 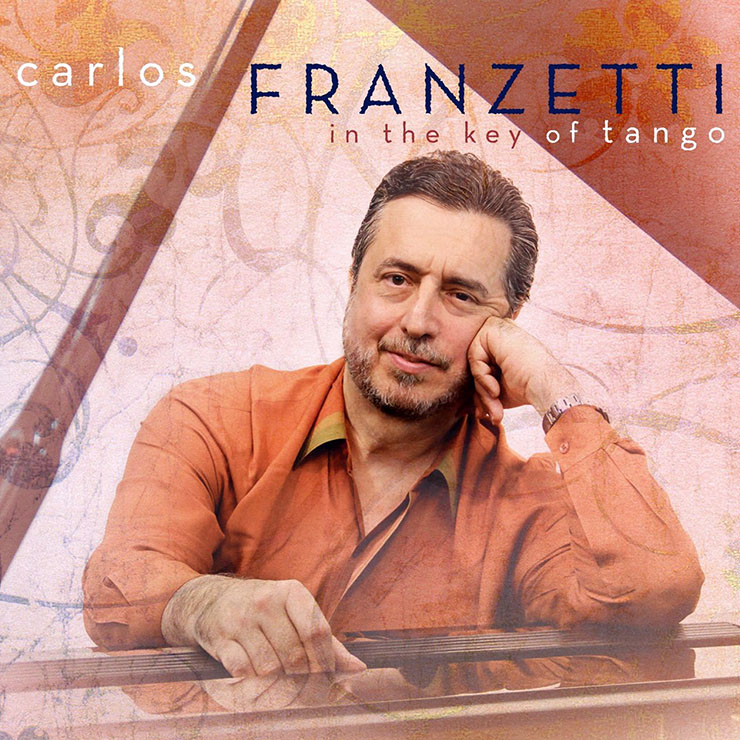 Of the handful of recordings featuring the music of the tango, fewer still occupy rather prominent places in the mind’s mind: the pianist, Amy Briggs’ thoroughly modern Tangos for Piano (Ravello, 2010), Paquito D’Rivera’s swinging Tango Jazz (Sunnyside Records, 2010), Pablo Aslan’s stately Tango Grill (Zoho Music, 2010) and Pablo Zeigler’s new take on the traditional tango, a recording with the Metropole Orkest, Amsterdam meets New Tango (Zoho Music, 2013). Now, this rather slim list must include a recording by one of the most tirelessly passionate champions of this dramatic music and dance: Carlos Franzetti. The recording is entitled In the Key of Tango. Something unique about this recording suggests that it will be held in high esteem for a long time to come. The reason: it is unrivalled in technical skill and an almost obsessively zealous of the enduring art of the tango, so much so that its protagonist, the ineffable Mr. Franzetti has “created” a special key all its own in which to describe and bring forth the dramaturgy of tango. This is important as more and more, artists are gravitating towards the southern part of the American continent to find rhythms and idioms to resuscitate their slumbering art. The “tango,” like bossa nova and son montuno, has become easy prey to the charms of some musicians.

But Carlos Franzetti is special; a pianist and most of all a musician who lives and breathes the tango as if it was soul food and has mastered it—like Mr. Aslan and Mr. Zeigler—as only someone whose heart maps the cultural topography of Buenos Aires can master the sensuous passion of the tango. Mr. Franzetti says that something almost magical happened to him when he visited the barrios of Buenos Aires recently, ostensibly in preparation for this recording. Listeners are privy to that mystical energy that was translated from the magic that ensued. Mr. Franzetti’s tangos are played with a breathtaking desire to get to the absolute essence of the drama that exists between the characters in the music/dance; in this case it is two imaginary dancers (not at all hard to imagine when Carlos Franzetti plays these tangos) sweeping across the waxes wooded floor. They cast fleeting glances and look deep into the others’ eyes; then look away and they make statuesque pirouettes as they gracefully traverse the breadth of the dance-floor telling stories of sensuous joy and abject melancholia. All of this happens as if by magic, when Carlos Franzetti lets his authoritative fingers hypnotize the keyboard of the grand piano.

Playing the tango—or any music derived from a storied dance routine requires giving up the whole body and the whole soul. Few artists have the ability to do this. Mr. Franzetti is able to give everything precisely because he is made almost completely of music. This cannot be said of many artists. But musical DNA is at the core of Carlos Franzetti’s very being. How else could he perform such a sublimely dolorous version of Carlos Gardel’s “Soledad,” an elementally beautiful and sad “Adios Nonino,” the grandeur of which recalls to mind the best triumphant feelings experienced in music? And who else could sustain such spectacular and lofty emotions throughout the session? Mr. Franzetti’s record In the Key of Tango is headed for greater things than might be unfolding at the moment, as is the pianist who continues to serve up spectacular music each time he sits down to play.