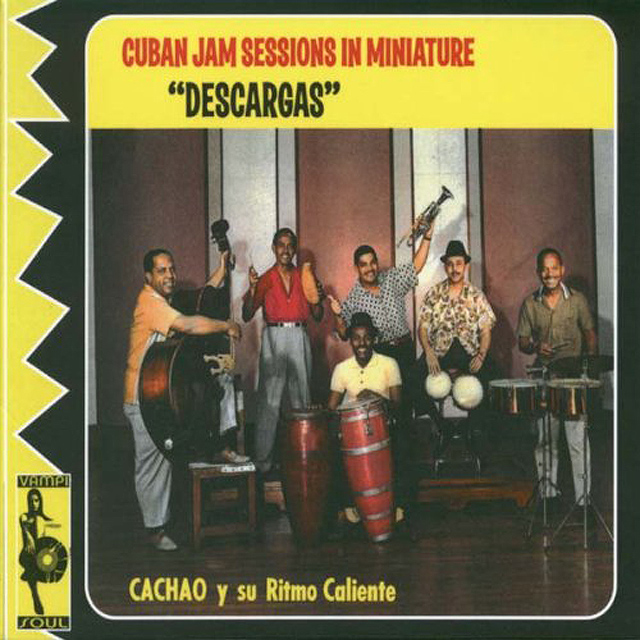 Depending on who you talk to, Cachao ‘invented’ the Descarga – the Cuban Jam. More accurately the Descarga was a natural extension of the ‘filin’ movement that had developed in Cuba of the 1940s. Julio Gutiérrez, Bebo Valdés, Peruchín and Niño Rivera were also involved in its development, but it is rightly suggested that Cachao took the Descarga to heights that it had never reached before. In 1957 Cachao made what is considered by many critics to be his most definitive recording of this music at EGREM studios: Descargas: Cuban Jam Sessions in Miniature distilled the essence of the Descarga into 12 short pieces that appeared on a Panart recording, into something of a vial of magic potion that when imbibed causes considerable inebriation, expressed in the form of dance.

Fifty-seven years on, another label (Vampi Soul) added eleven additional tracks (recorded in 1961) to the original release – all Descargas, of course – making a total of 23 tracks. Today it is impossible to imagine a world without these ‘miniature’ jams (together with The Master Sessions – Volume 1 & 2). The fact is Cachao was always at the top of his game whenever he played. His sense of his Afro-Cuban roots made his music glow like red-hot coal. He is rightly considered the greatest Cuban bassist, or at least the father of Cuban ‘bassism’, if you like – to Cuban music what Jimmy Blanton was to Jazz. His time was impeccable and he brought to the music he played a giant palette of tonal colours. Texturally his playing was as visceral as it was crisp. He also added a vivid imagery of the comparsa melded together with the elegance and immaculate rhythmic movements of the gliding steps on the waxen floor of the dancehall.

Descargas: Cuban Jam Sessions in Miniature contains some of Cuba’s most iconic mambos, boleros and danzón music turned upside down as Cachao revitalized them in the form of roistering jams. Many of the songs here were written by the famed Osvaldo Estivill and Cachao gives these his special treatment. Listen to ‘Descarga Cubana’ and you will hear what I mean. ‘Descarga Mambo’ and Descarga General’ written by Orestes ‘Macho’ López are effervescent re-enactments of wild Havana nights. ‘El Manisero’ written by Moisés Simons the Cuban musical icon is superb and played with classic energy and virtuosity. Two of the players who provide standout performances are the legendary Tata Güines on tumbadora drums and the equally iconic Guillermo Barreto on timbales. Together with the bongosero Rogelio ‘Yeyo’ Iglesias and Cachao, this rhythm section roars throughout the performance.

To say that this music was revolutionary would be under-stating the case. Nothing that Cachao, Tata Güines – who shines like a gleaming gem on ‘Popurrit de Congas’ – or Guillermo Barreto was ever normal. This spectacular music spread over 23 tracks provides a glimpse into Cachao’s world. The music draws you in, mesmerises you and challenges you to sit and listen without jumping to your feet and dancing wildly.