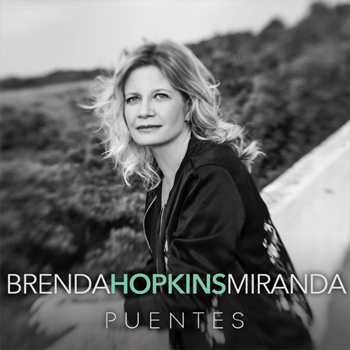 The black and white cover of this disc by pianist Brenda Hopkins Miranda is a perfect entrée into the music of Puentes as it sets the tone for the songs that sway, bob and weave from light to shadow. In fact despite the bright, quite brilliant and vivacious performance of Anthony Newley and Leslie Bricusse’s “Feelin’ Good” the music settles into a profound darkness with “Black Coffee”, repeating this vivid and moody back and forth song after song. Through it all Brenda Hopkins Miranda directs proceedings with an inimitable stabbing percussive pianism. Her intense, pointillist right hand prodding as she charts a course for the sometimes twisting melody is superbly backed up with a left hand that jabs at the notes in the bass clef with which she suggests the direction that the harmony may go into, creating wondrous musical rivulets.

An extraordinary energy follows from the piano which resonates not only with the guitarists who provide momentum for the music, but also enormous boost to the booming percussion. The two percussionists, Andrés “Kino” Cruz and Frederick Lashawn together with drummer Manuel Martínez and bassist David de León, enrich the harmonic content of each song – especially on the gorgeous musical tapestry of “Verde Luz”. The song takes a dramatic, upbeat turn after its deeply meditative predecessor, “Preciosa”. Still nothing on the recording can prepare the listener for the theatrics of “Lamento Borincano”, a sweeping solo performance by Miss Hopkins Miranda, who, as it turns out, displays another, lyrical side to her piano-playing which seemingly takes its cue from any one of the disc’s superb vocalists.

But there is one aspect that supersedes all of the other attractive features of the music on this disc and that is the masterful arrangements by Miss Hopkins Miranda. This is not only true of the obvious American standards on the album such as “Feelin’ Good” and “Black Coffee” – both dramatically rehormonised, but on other songs as well. Roberto Cole’s “Romance del Campesino” is turned into a luscious arrangement of symphonic proportions with dazzling arpeggios and impossibly lyrical melodic leaps. The same could be said of Curtis Mayfield’s classic “People Get Ready” in which the anthemic quality is enhanced to an almost feverish pitch. All of this suggests that Miss Hopkins Miranda may be one of the most talented pianists to come out of Puerto Rico in recent times.