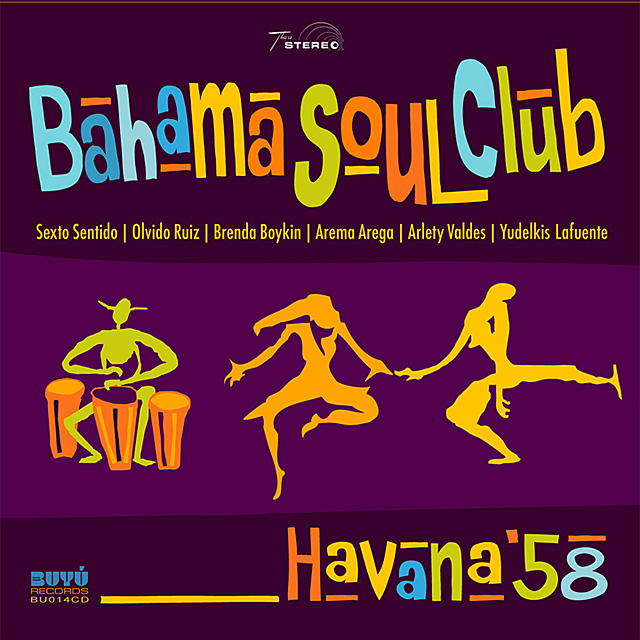 The year “1958” in Havana ‘58 by Bahama Soul Club has rather risqué connotations – raising the spectre the dying days of the Batista regime in Cuba, with its Cuban and American jet-set in a tail-spin. But Havana ‘58 is also an extraordinarily “visual” experience in its rhythmic hedonism. The Baals seem to have been let loose in a long goodbye of rum n’ rumba, mobsters and mambo, but if you think that Castro and his revolutionaries are at the door, perish the thought. All that the hot, southern breeze brings is the aroma of “Ron con Ron” and rivers of sweat from the dancing.

There is an unforgettable lesson to be learned from this high-living musical decadence and it is this: When rhythmic temptation is inevitable, simply lie back and enjoy it. And there’s plenty to be mesmerised by on this disc by Bahama Soul Club’s Havana ‘58. For sure it is the beguiling voice of Olvido Ruiz – at one time the irresistible face and reigning queen of Bahama Soul Club – on “Muévelo Papi”, “Let God” and “Night Breeze”. Ruiz has never held back her charm, or the sensuous and marvelous articulation of her sensuous whispering voice and she turns all of this on in each of the songs from the boogaloo of “Muévelo Papi“ to the dusky, cool “Night Breeze” and on the midnight blue “Let God”.

Afro-Cuban Ritmo also comes gloriously to life in the charts by Sexto Sentido, especially on “Elegguà”. But the Orishas will not be easily placated, it seems. At least there’ll be no pleasing them; not unless more votaries are made to them. This comes in the utterly seductive form of Brenda Boykin on “No Words” and “Dizzy’s Bounce” a graceful doffing of the proverbial hat to bebop and the American Cultural Ambassador to Havana, Cuba; as well as to the impeccable grandeur of Arema Arega’s vocals in “Rumba Fugaz”.

Of course, none of this would have come to pass without the masterful contributions of André Neundorf and Oliver Belz, and other members of the Bahama Soul Club – in particular, the percussionists and bassists, who create the seemingly eternal hypnosis. It’s a hard one to wake up from, especially after nearly an hour of musical mesmerism. It is old-school, hot, buttered soul at its very best – this picture-perfect soundtrack to Cuba “Before the Fall” in Havana ‘58 from Bahama Soul Club.