Arturo Sandoval: Dear Diz (Every Day I Think Of You) 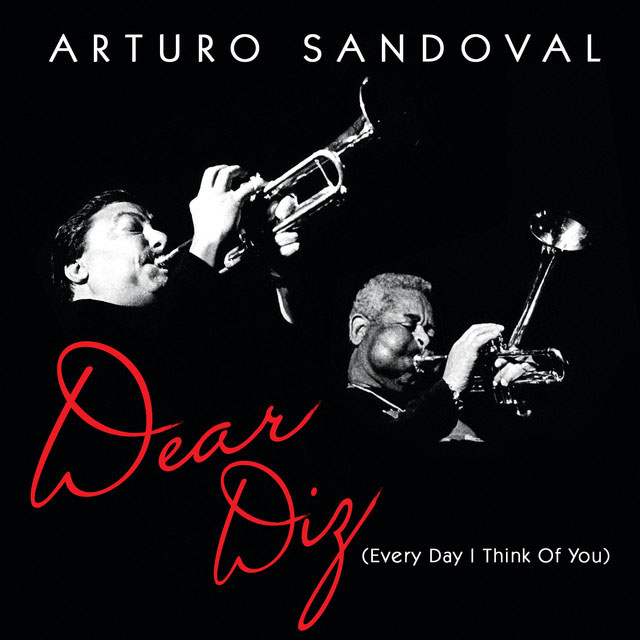 Of all the larger-than-life characters that filled the landscape of the arts in the world one musician, John Birks “Dizzy” Gillespie stands head and shoulders above almost all of the others. Not only did Dizzy as he is known to musicians and fans alike, shape, with Charlie “Bird” Parker the musical language that is called “Bebop,” but the trumpeter with an up-swept horn was its spokesperson and advocate for the longest time; he was also its resident clown. But most of all Dizzy was known to one and all as having one of the sharpest brains and the biggest hearts in the business. Moreover, Dizzy was possessed of a soul so intense that he was music, and life itself. So how would one of his most famous protégés celebrate his mentor with a musical tribute that is to say, with something given voluntarily as due or deserve? There can be no better display of such a reverential tribute—at least so far—than Arturo Sandoval’s Dear Diz (Every Day I Think Of You) and here are some of the reasons why:

First and most importantly: Arturo Sandoval chose to pay tribute in the big band sound scape. This twenty-four or more person ensemble seems to be the perfect sized band to capture the enormous character of Dizzy, puffed out cheeks and all. When Dizzy’s sound embodied all that was sharp and pure and irrepressibly joyful, what better way than to have twenty-four artists sing his horn and his absolutely larger-than-life love of music express this sort of personality. That Sandoval employed some of the most gifted arrangers to write charts out of Dizzy’s best-known music and score the music with the crispness and purity of a clear day in spring is simply the icing on the cake. This is a band that is well-rehearsed and seemingly so much in love with the music of the master that they come to it with an absolutely natural affection. Having Sandoval lead the band with his irrepressibly sparkling playing is a large bonus for the ensemble. This is certainly how that classic big band that Dizzy once led at Newport in 1957 must have felt, playing behind its leader. Sandoval has certainly learned his lessons well. He plays high and mighty as he once did with Dizzy’s United Nations Orchestra at the Royal Festival Hall in 1989. Sandoval has a rich intonation, can play with perfect trumpet diction, even when he is playing fast. He also sometimes mashes notes like his hero and does this so occasionally that it is a delight to the ear. He plays with mighty glissandi and when he solos the warmth that is exuded from his burnished horn is so dazzling that it can be a tad blinding. Still his voice is singular and he imitates no one, but always plays Sandoval with mighty gusts of wind and spectacular purity.

Secondly Dizzy loved Cuba and Cuban music. His heart was so big that he was able to play with genius in an idiom that was as overpowering as the legendary conguero, Chano Pozo and subdue his own genius to the extent of letting others flower. The trumpeter’s story of how he and Pozo wrote the great “Manteca Suite,” sadly missing on this record, is legion. But such was Dizzy’s genius that he learned the Afro-Cuban dialect fast and was able to perform brilliantly on so many occasions. Sandoval gives Dizzy great honour in his superb version of “Tin Tin Deo,” another wonderful Pozo chart that became the mainstay of Dizzy’s repertoire. Sandoval also showcases Dizzy’s Afro-Cuban side with a sparkling and joyful version of “Fiesta Mojo,” a little-known and certainly rarely played gem from the pen of the master.

Thirdly and probably most important of all, when giving praise for the love showered on him by Dizzy, Arturo Sandoval plays at his finest; and what better tribute can there be? Why, assembling some of the finest musicians to do your will. And here, Sandoval has worked with the meticulousness of Duke Ellington. The trumpeter has chosen not just instrumentalists but compiled a list of musicians whose ingenuity would best express the complex and joyful music of Dizzy Gillespie best. Hammond B3 organist Joey DeFrancesco is an inspired choice as is evident from “Birks Works.” So is the great clarinettist Eddie Daniels although the absence of Paquito D’Rivera is viewed with some trepidation. Still Daniels on “Fiesta Mojo” is a perfect fit.

Finally the music of jazz is all about taking risks and Sandoval certainly has with rendering Dizzy in a sound scape so large. But when he blows his horn with a string quartet in toe on perhaps Dizzy’s greatest and most difficult chart to play perfectly, because so much is dependent on emotion and duende everything could go wrong. However, this does not happen on “Con Alma” with the muted voice of Sandoval and the bronzed glow of his muted horn setting the colour and shade of soulful playing. The album is worth it if only for that chart. For here is the epitome of perfection.

Tracks: Be Bop; Salt Peanuts! (Mani Salado); And Then She Stopped; Birks Works (a la Mancini); Things To Come; Fiesta Mojo; Con Alma (With Soul); Tin Tin Deo; Algo Bueno (Woody and Me); A Night In Tunisia (Actually An Entire Weekend!); Every Day I Think Of You.