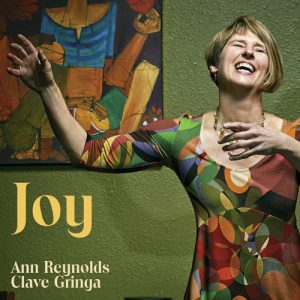 On some discussion boards – both serious and frivolous – you’ll find a persistent debate about the word “gringa”; is it a pejorative or an acceptable term of endearment? One need never be as concerned as to the direction of its meaning when it comes to Ann Reynolds – or “Ann-ita” as she is often affectionately referred to by the many Afro-Cuban musicians with whom she has shared her considerable love and considerable knowledge of the Afro-Caribbean traditions and musical forms. And there can also be no doubt about any of this when you listen to the music of Joy either – not only for her pianism, but also for the manner in which she has internalised the “foreign” idiom that she has come to inhabit as her own.

Afro-Cuban forms such as “son cubano” danzón” and “guaguancó” are worked into this sublime music as if they were written by a native of the region. And while, on the surface, that may seem possible today with all of the sophisticated teaching that goes on in modern academies around the world, in truth, the “feel” comes only to those who don’t simply inhabit the art, but embrace it as one does a member of the family; not simply a loved one, but one who is “especially” loved”. This is what Ann Reynolds brings to her music. To “feel” the fullest effect of how Cuba and its beauty and traditions have imprinted itself on Miss Reynolds one need merely listen to her seemingly “spontaneous” song “En La Calle”. The key word is “spontaneous” as not only does the music come from such a place when “rumberos” get together and sing anywhere when the spirit moves them, but the music – sung by Miss Reynolds, no less – seems, in effect, a “spontaneous” creation.

Miss Reynolds also seems to have attracted the very best for her latest musical sojourn. Two names that leap to mind are the young and sensational bassist Tailin Marrero Zamora and the equally prodigious percussionist Maria de la Paz Fernandez. Both musicians are now also members of Jane Bunnett’s latest reincarnation of the celebrated Afro-Cuban ensemble Maqueque. Together these two young women (as well as the other brilliant rhythmists including bassist Kelsey Mines and percussionists José Eliado Amat, Paoli Mejías, Ricardo Guity and Steve Smith) keep things real and wonderfully celebratory making as if a “comparsa” is passing us by rather than music separated by stage and audience. One would be remiss if one did not single out trumpeters Julito Padrón and Daniel Barry for special mention; they play this music with a quietly simmering flame rather than announce a raging fire and it is their performances that contribute to the unique character of Miss Reynolds’ music and this is sure to astound those aficionados who have made Afro-Cuban music their own.

Previous article
Patato: Masterpiece
Next article
Bill O’Connell and The Afro-Caribbean Ensemble: Wind Off the Hudson