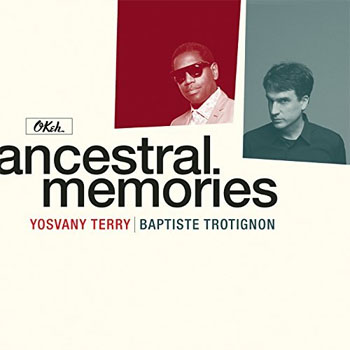 Each of these premiere recordings on Ancestral Memories references the continuum of music written and performed in a series of cycles that seem to intersect one another. There is, of necessity, an African mother lode pulsating at the heart. It is one not only shared by Yosvany Terry and his brother Yunior, but also by Jeff “Tain” Watts and it draws in the pianist Baptiste Trotignon as well. And each of these exquisitely played songs explore in delicately charged detail the blurred horizons beyond the extremities of each intersecting circle while seeking what lies beyond.

The ten works are also united by the alchemical means that Yosvany Terry and Baptiste Trotignon bring to combining horns and piano, meaning and sounds in short, intimate, poetic works concerned with matters not only of youthful experience, but also historical memories that have been embedded in the artists’ unconscious either by inheritance or by rote. They are made clear in “Ancestral Memories” as well as in “Minuet Minute”, in which saxophone, chekeré, piano and crystal ball resonate with the highest levels of deconstructed dialogue that culminates – in the written bars of each – compelling phrases that bring the music, as in sound, so also to colossal silences.

Written and improvised segments in each of the songs are similarly pregnant with possibilities, and is integrated by the most unexpected one of all, suggested more by intuition than by intelligence. “Reunion”, focusses on lyrical outpourings of longing, sadness and joy. “Lost Souls” is evocative of a finality that awaits the beautiful and the damned. Likewise each of the other songs contains an emotional beauty that is richly detailed and expressive and played by Yosvany Terry, Baptiste Trotignon, Yunior Terry and Jeff “Tain” Watts as if savouring the intimate writing with great fragility and purposeful intensity.

The poetic and generous playing especially of Yosvany Terry and Baptiste Trotignon unites their diverse personalities in a manner most rare. It would be exciting indeed to hear them take this kind of transcendent union to another level where, perhaps they might – heading in more daring structural and harmonic directions – explore works of a more extended nature, one, perhaps showcasing more – much more – of Yosvany Terry’s extraordinary language of “the symphonic chekeré”. From the perspective of these Ancestral Memories somehow that almost seems a distinct possibility.