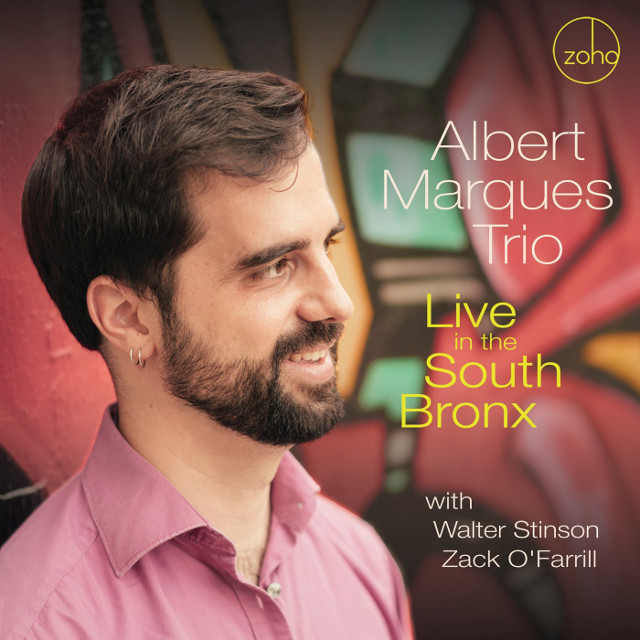 There can hardly be enough applause for this record. The quality of playing on the part of pianist Albert Marqués, bassist Walter Stinson and drummer Zack O’Farrill is altogether exceptional. Marqués takes nothing for granted in music and neither do his partners here. Nor should we in listening to them. The fact that the pianist is driven by the particular rhythms –not simply the popular bulerías, but more specifically the winding pirouettes of the sardanes among other musics of the Catalan/Valencian realm – precludes some form of musical tracery, but Albert Marqués doesn’t do anything wildly idiosyncratic, let alone provocatively iconoclastic. Mercifully also, the young pianist shows no sign of being a budding prophet. Rather he plainly understands that every manner of melding his Spanish heritage into the deep-rooted melancholia of its Arabian influences just as much as the polyrhythmic influences are pre-dominant in all so-called Latin Jazz.

Still, Albert Marqués offers us a very enticing opportunity to open our minds, especially the minds of those most burdened by the conventions of the tradition. His music thus becomes first and foremost less dependent on the grandiosity of old and more spacious, enticing in a viscerally exciting way. Two striking examples of this are Albert Marqués’ “IDN” and the virile “Jazz Is Working Class”. The writing is superb here. Moreover, both Walter Stinson and Zack O’Farrill respond with sinuous contributions. Stinson’s bass has a characteristic woody tone and this indulges his penchant for rustic tonal colours. O’Farrill is brilliant in the controlled elegance that informs his playing, although on the latter piece he seems to throw caution to the wind and allows a wild streak to dominate his playing. In Marqués’ playing revelations abound everywhere. He dives from the tonal into another world at the drop of the proverbial hat. His pianism is full of glinting lights, mysterious depths, expectations, frustrations, hopes and doubts; it’s almost like listening sometimes to the shards and shadows of an idea from Thelonious Monk. Such is the depth of his music’s characterisations and the exceptional range and refinement of his pianism.

The variety and stylishness of this enterprising programme would have been incomplete without these matching performances from Walter Stinson and Zack O’Farrill. Both, bassist and drummer, play with effortless virtuosity, urbanity and lyricism. Their presence and playing is often softer, almost seductive – especially in the profoundly poetic cadences of “Cançó Pel Pare” – where they match the intensity of the lead provided by Albert Marqués. Both bassist and drummer play with buoyant, aristocratic grace and psychological ambiguity. Meanwhile Albert Marqués remains insolently effortless in his pianism as he brings debonair virtuosity and swagger of his own when re-imagining Wayne Shorter’s “Iris” and a sassy swing to Bill Withers’ “Ain’t No Sunshine”. The album concludes with “Alan Watts” a ravishingly subtle chart by Walter Stinson, followed by the virtuosic, goblinesque “Foggy Conscience” by Zack O’Farrill, both of which complete the slightly irreverent thumbing of the nose at convention by this young, ever-talented trio.