“Afro Horn MX came to my attention by way of a series of video clips titled, The Afro Horn – Very Serious Stuff. The clips feature the horn section who, take to the stage and nearly raise the roof. Needless to say I was intrigued.”

My curiosity led me to the Mexican percussionist, composer and arranger Francisco Mora Catlett and the fascinating origin of Afro Horn MX. Mora Catlett was introduced to the writings of the African American poet and writer, Henry Dumas by the musician and self-proclaimed member of the “Angel Race,” Sun Ra. Mora Catlett’s fascination with the story, “Will the Circle Be Unbroken,” in which a musician named Probe acquires the Afro Horn from a mysterious peddler and wields its power, lies at the heart of the band’s beginnings.

Mora Catlett hails from an artistic environment. His mother, father and siblings are celebrated artists in their own right. He took to the drums at an early age and achieved rock star status as a member of “The Prophets.” From 1968 to 1970 he worked as a session musician for Capitol Records Music Division. Through a grant from the Mexican Government he moved to Boston and studied at the Berklee College of Music. From 1973 to 1980, Mora Catlett “traveled the space ways” with Sun Ra’s Arkestra. The experience left a lasting impression and influenced much of his later work. Eventually Mora Catlett settled in Detroit, where he founded a production company devoted to Afro-Cuban music. In 1987 he released, “Mora!” his first recording as a leader. In 1993 he became a visiting professor at Michigan State University and worked with Carl Craig’s Innerzone Orchestra. Over the years Mora Catlett has studied and performed with Max Roach and Babatunde Olatunji among others. 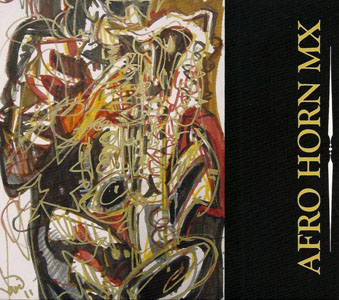 For Afro Horn MX, Mora Catlett assembled a stellar cast: Cuban pianist and co-producer Aruán Ortíz, who has built his career on weaving disparate elements into his compositions, master percussionist Román Díaz whose knowledge of the interrelation between Cuban folklore and avant-garde jazz was key, the saxophonists John JD Allen, Vincent Bowens and Alex Harding, each a power house in his own right and bassist Rashaan Carter. In the liner-notes, Mora Catlett credits the “talent, expertise and great disposition” of his band mates and applauds them for creating “something meaningful.” It’s worth noting that the recording session was completed in one day.

All of the tunes were composed, arranged and produced by Mora Catlett, a free thinker who merges jazz, African rhythms, Cuban folklore, the spoken word and Mexican Magic Surrealism in a very unique way. Some of my favorite tunes include, 125th Street and Lenox is a scorching, groove-oriented conversation between the rhythm section and the saxophones. Saints at Congo Square conjures up images of the slaves who gathered at the historic in New Orleans to dance, sing and perpetuate their culture, The Cultural Warrior slows down pace and showcases the band’s soft side, Los Consejos de Olumo (The Council of Olumo) features the voice of Román Díaz, who recites a “descarga poética” (poetic jam session) by the Cuban poet, Rogelio Martínez Furé.

Afro Horn MX is an independent recording that makes a fresh, bold statement. Because of its independent status it will probably not receive the attention or air play it deserves. Nevertheless, it is deserving of wider recognition.

All compositions (except where stated)/arrangements/production by Francisco Mora Catlett, co-produced by Aruán Ortiz.