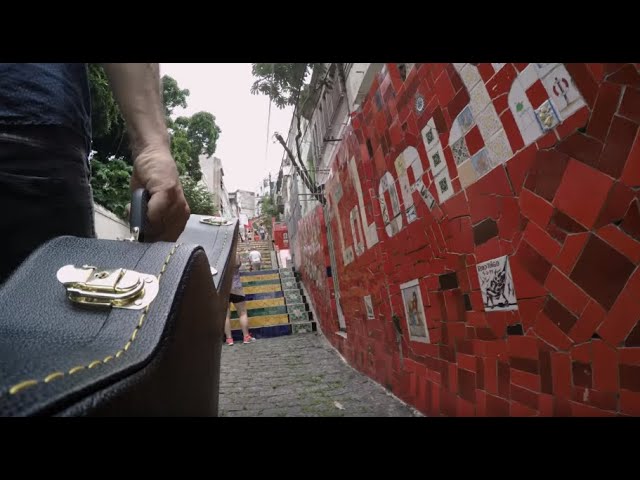 Anyone approaching this film about the iconic Cuban composer and pianist Omar Sosa, by the award-winning filmmaker Soren Sorensen will be almost immediately struck by its [the film’s] Joycean [Ulysses-like] ‘stream-of-consciousness’ narrative style. While this may not have been the intention of Mr Sorensen at the start of his epic odyssey it becomes a unique and quite stunning device for telling the story of one of the most unique Cuban artists of an era – contemporary or otherwise.

The title of the film – Omar Sosa’s 88 Well-Tuned Drums – is an oblique reference to JS Bach’s epic books I and II of The Well-Tempered Clavier, is well-intentioned yet also emerges as ironic and slightly irreverent when it deals with the poetics of Mr Sosa’s music. It is both daunting [and hardly fair] to even attempt a classification of Mr Sosa’s musical poetics despite the fact that the initial montage of interviews by several critics and producers use several epithet to describe the experience of listening to Mr Sosa.

Mr Sorensen therefore lets the music speak to the reference to what, in fact, unfolds as Mr Sosa’s percussive approach to the piano; the 88 keys – at well-tempered intervals – are manipulated by touch, articulation and dynamics into a symphony of melodic, harmonic, and percussive music that seems to emerge from deep inside the very heart of the pianist. The music is seemingly been composed by the restless nerve-endings of the pianist’s very finger-tips rather than the end of a pencil to be precise. And this is exactly what defines the role of Mr Sosa’s entire nervous-system in the whole musical equation: delicately controlled impulses naturally designed to interpret the language of the pianist’s heart and soul on which his unique humanity is written.

Mr Sorensen has divined the perfect technique for telling the story of Mr Sosa and his music. This is a breathtaking, non-linear narrative, but a wonderfully unfolding, deeply engrossing story full of agony, ecstasy, [musical] community and utter loneliness, all of which drives the artist – any artist, really – but which is a lifestyle that is so unique to Mr Sosa, that it becomes a life-story – from Cuba through [the liberation of] Angola to Europe and the United States, which is both terrible, as well as exhilarating; so full of doubt and pain and somehow full of triumphant, cathartic pathos as well.

This narrative weaves back and forth in time and place as Mr Sosa tells his story, accompanied by a musical commentary on the piano, often with other musicians. We live through the questing urges of the pianist, his sojourn from his birth in Camagüey, Cuba’s third-largest city, conservatory education in Havana, and relocation to Ecuador where he briefly wrote and arranged commercial jingles. Sosa’s story continues with a fateful mid-90s move to the U.S., a stint as a sought-after sideman in the Bay Area’s Latin jazz scene, and partnership with manager Scott Price that continues to this day.

Along the way we meet the globetrotting artist in various emotive and evocative settings – his duo with celebrated Italian trumpeter Paolo Fresu is absolutely unforgettable where during a live performance the trumpeter ends the set by holding just one note while Mr Sosa propels the music with rhythmic cascades… until the trumpeter stands up, walks around the enormous concert grand and the rhythmically-yammering pianist as his note fades into the distance. We also meet with Mr Sosa’s Afri-Lectric Experience, and with his latest band, the Quarteto AfroCubano in storied venues including New York’s Blue Note Jazz Club. Sosa’s Quarteto AfroCubano features fellow Camagüey natives Ernesto Simpson on drums and Leandro Saint-Hill on alto saxophone and flute and bassist Childo Tomas, who hails from Maputo, Mozambique. Perhaps most thrilling for [Omar Sosa] fans will be the full-circle nature of Sosa’s 2015 album Ilé, which reunited Sosa’s music with its Cuban roots.

The most thrilling performances, by far, are Mr Sosa’s live performances with the Senegalese kora master, Sekou Keita, the Venezuelan percussionist Gustavo Ovalles – a master maraquero – and the bewitchingly virtuosic and ethereally beautiful and Cuban-Swiss violinist, vocalist and dancer Yilian Cañizares, whose performance precedes the magical film’s dénouement. By this time we have discovered an artist whose quiet humanity is actually larger-than-life, whose puckish smile punctuates the raw silk of his speaking voice as he connects some of the dots in the woven narrative of a life in music; and who seems just a handshake away, yet retains his unique mystique. A son of the Orisha Eleguá or perhaps – one might begin to wonder – even the very personification of the Orisha himself – musically-speaking, of course…