The Big Band Bogota 2011, A Road to Explore Colombian Jazz

For two consecutive years IDARTES (District Institute for Arts in Bogota) has presented the Big Band Bogota Project which was created for the first time last year to celebrate the 15th anniversary of the International Jazz Festival “Jazz al Parque” in the city of Bogota. This is an experimental musical project in order to explore new sound possibilities of jazz music in Colombia. The project has consolidated into a great band that puts together recognized and young musicians who play an open and diverse repertoire of Colombian jazz. This brilliant idea is a way to create dialogue between artists of different ages in order to interchange knowledge and stimulate creation in areas including composition, arrangement and performance.

This time, the Big Band Bogota worked with different sounds, and implemented instruments which are not typical in jazz music like the accordion or tiple in order to reflect on other options of the jazz music creative process, improvisation and collective composition which are essential in this music genre. The repertoire for 2011 consisted of seven works, played by 21 soloists and more than 30 musicians. The Big Band Bogotá 2011 is an endless sound exploration to visualize new roads to musical destinies in Colombian jazz. 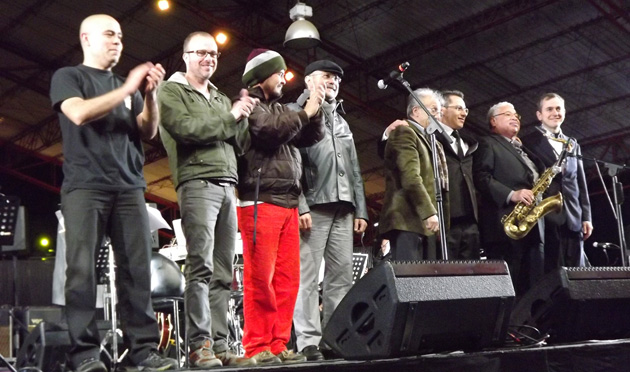 The Big Band’s Creators and Their Repertoire

The huge project was a reunion of real, virtuous, young, and worldwide recognized musicians. The director and conductor was Rafael Sandoval, a saxophonist and clarinettist who has participated, as a musician, in many bands like Magenta, Edy Martínez, and Nathalie Gampert. He played for Dade College Jazz Big Band in 2006 and 2007, and won the first place in the Jazz Colombian Composers competition of Big Bands in 2009.

For this opportunity the big band had seven invited composers representing different styles and concepts. With classical training and studies in jazz piano from the University of Miami, Ricardo Uribe was one of the participants in the 2011 edition of Big Band Bogota. He has been involved in different jazz projects around Colombia especially musical productions. For the festival show he created a work called “Suite” which consisted of three parts; currulao, porro and swing. The non-conventional instrument chosen was the harmonica, played by the virtuous Gregoire Maret.

The second composer was William Maestre, a Colombian pianist, composer and arranger who has been working in the field for more than 25 years. Currently he is a university professor and co-director of the Zaperoco band.  Mr. Maestre composed a piece called “Magenta” which contains some elements of Latin jazz and songo. The African percussion instrument Djembe was the chosen non-conventional instrument, played by Juan Carlos “Chongo” Puello for the solo part.

Another composer invited to the Big Band Bogota was Alejandro Forero, president of La Distritofónica Records and member of the bands Asdrubal and Meridian Brothers. He works as a composer for experimental animation and visual projects. For Jazz al Parque’s project Mr. Forero created a musical piece called “Quiebre” full of new textures and produced from the symbiosis between jazz and electronic sound. The instrument, used for the solo, was the electronics played by Eblis Álvarez.

Continuing with the list of committed composers, this year the Big Band Bogota was pleased to receive one of the most remarkable figures in Latin jazz history, Edy Martínez. Mr. Martínez has been nominated for Grammy Awards for working on albums like “Homenaje a Benny Moré” (Tribute to Benny Moré) with Tito Puentes, and “Unfinished Master Piece” with Eddie Palmieri. The ever talented arranger and director brought his powerful and emotional song “Celebration” to this event. For Martínez’s work, a vibraphone (played by Karen Bravo) was the instrument selected as the non-conventional one because this instrument is not typically used in Colombian jazz.

The young composer Edson Velandia was also part of the composition team. Edson is a musician from the town of Piedecuesta (Santander province in Colombia), who created a unique style called Rasqa. Mr. Velandia has recorded 9 albums including music for movies, theatre, dancing and radio. This year he composed “Sinfonía Municipal # 4” (Municipal symphony # 4), an original, dramatic and tense score which was listened to by the audience while observing the particular way Mr. Velandia conducted the big band. For the improvisation part, the non-typical jazz instruments were a Casiotone keyboard (played by Henry Rincón), and an Ipad (played by Daniel Bayona).

Juan Carlos Padilla, a talented self-taught musician, winner of national composition awards and a composer for soundtracks in Europe, brought to the festival a beautiful piece called “Aquarimantima” which combines elements from the popular pasillo rhythm and jazz to produce a profound and exquisite sound. His non-conventional instrument for the solo was the tiple, played by Alejandro Flórez. 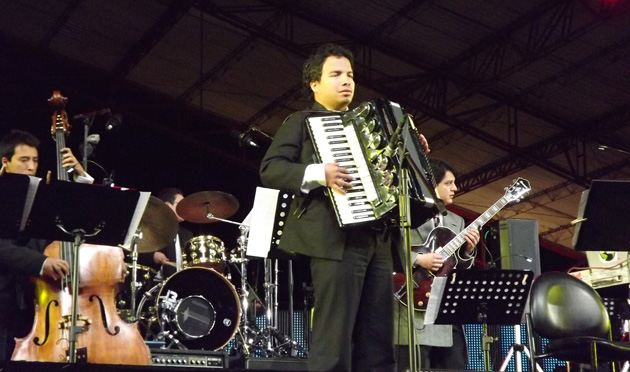 The Big Band Bogota 2011 presented three shows in different theatres around the city. This short tour was very successful in terms of audience’s attendance and acceptance. The idea with this great project is to consolidate a big band which can play a diverse repertoire in different cities in Colombia and other countries, showing the talent and creativity the Colombian musicians have as well as the beauty of the different kinds of Colombian music.