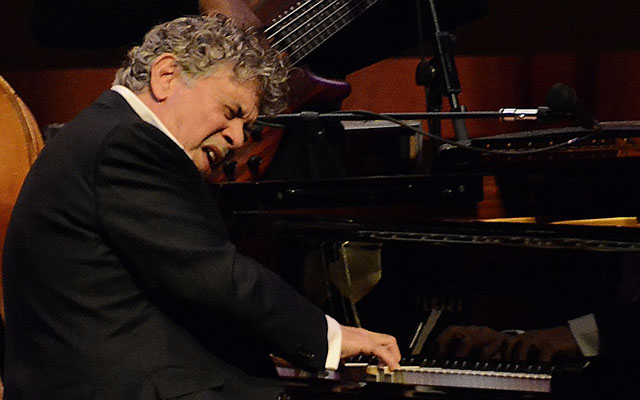 Back in 2005, Monty Alexander recorded Concrete Jungle, a heartfelt tribute to Bob Marley and his musical legacy. Teaming up with Jamaican top session players at the historic Tuff Gong Studio in Kingston, Jamaica, the pianist chose and arranged twelve compositions penned by Marley, bringing together Jazz and Reggae. The result was magnificent. A few years later he recorded Stir It Up – The Music of Bob Marley, a great follow-up to Concrete Jungle. In 2011, Harlem-Kingston Express (a concert recorded at Dizzy’s Club Coca Cola in New York City) came out on Motéma Music. The saga continued and in 2013, a studio recording entitled Harlem-Kingston Express Vol. 2: The River Rolls On was released (again on Motéma). Is with this project that Mr. Monty Alexander has been touring and thrilling audiences in US, Canada and Europe, supporting his new album. The Harlem-Kingston Express made a stop in Toronto on the evening of April 25, 2015. It was a magnificent evening that came to an end with the participation of Mr. Monty Alexander’s partner in music and life, Caterina Zapponi. The New York City-based Italian-French singer performed two songs from her latest CD Romantica: “Estate,” a Bruno Martino composition included on Joao Gilberto’s landmark album Amoroso; and the classic immigrant song “Torna a Surriento (Come Back to Sorrento).”