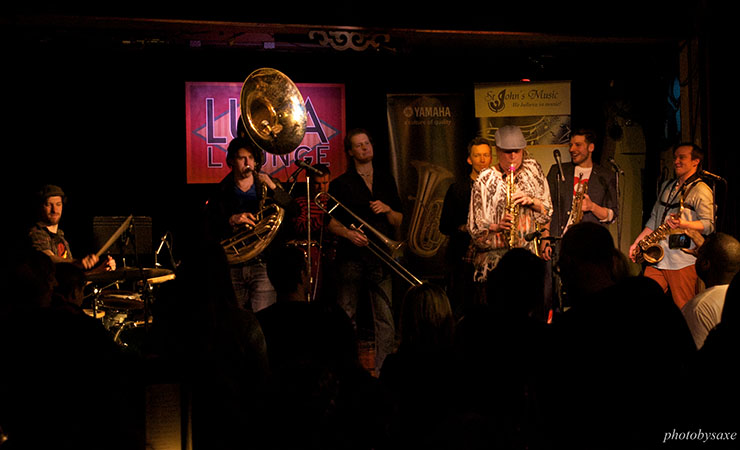 “I was lucky enough to make my way down from Orangeville (where?) to the big city on a Thursday night and attend what promised to be a great show: The HeavyWeights Brass Band Brasstronomical CD release party @ Lula Lounge on March 6th 2014″

From the first note of ‘When the Saints’ rang out, (walked in by the opening Street Brass) to the musical crescendo that the HeavyWeights create whenever they play – there was a spirited exuberance in the room.  Celebrating the release of their second disc, you could tell that the band was primed and ready to play.

The HeavyWeights played down their new CD from top to bottom, opening with Jon Challoner’s original and title track “Brasstronomical” – settling immediately into a Trombone Shorty influenced groove, the band never looked back.  Next up was Paul Metcalf’s smoking original “Booze Hounds” featuring vocalist Jay Douglas.  I don’t think anyone could be still from here on in.  Drummer Lowell Whitty set up the groove and held the whole tune in a big swampy pocket – the only thing more fun than watching Lowell play is hearing him play.  Along with Rob Teehan on Sousaphone (chops of steel), the rhythm section groove is completely infectious.  I’m still humming the horn lines to this one, and Jay Douglas sure was a great pick for this tune.

As they worked down thru the set, the virtuosity of each of the players was exposed and the commitment to the music became apparent.  You really sensed that they were forgetting themselves and leaving it all on the table, for the music.  There is no question these guys love what they play, love the stage, and love performance.  The previously mentioned Booz Hounds, Misterioso (featuring Jane Bunnett’ soprano sax and Luis Orbegoso on percussion) and the St. James Infirmary Blues (with Rob Teehan’s “secret” vocal skills) were standouts on the evening for me.  Special mention also goes to the water bottle toss from the drum set during a saxophone cadenza!! (Thankfully missed its target)

If you don’t already know, the HeavyWeights are:  fearless leader Chris Butcher on trombone (and MC); John Pittman and Jon Challoner on trumpets/flugel; Scott Metcalfe, tenor and baritone sax; Lowell Whitty on drums and Rob Teehan muscling up the Sousaphone.

Expectations of a great show were exceeded.  The picture of a rocket shaped horn on the new CD cover might be giving away this bands fight path – every time I’ve had the pleasure of hearing them they sound better and better.  Brasstronomical indeed!  If you missed this show – hit their website or connect on FB for the next opportunity to hear them live.  In the meantime, grabbing a copy of Brasstronomical will sustain and nourish your musical appetite.  I’m betting you’ll be humming horn lines as well.