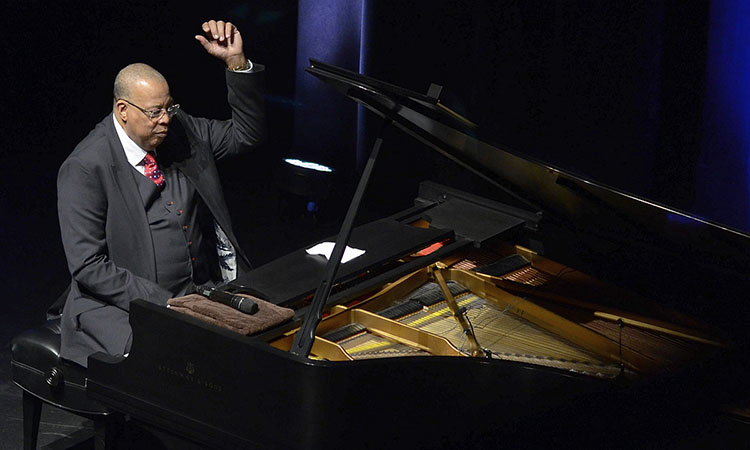 On Friday, September 26, 2014, legendary Cuban Piano Master, Dionisio Jesús Valdés Rodríguez, better known as Chucho Valdés, offered a magnificent solo performance at the Flato Markham Theatre, located in the heart of the city of Markham, Ontario, Canada. This year marks the theatre’s 30th Anniversary, and Mr. Valdés had the honour of opening its 2014-2015 Diamond Series Season, which celebrates the 2015 Pan Am/Parapan Am Games, to be hosted in the GTA (Greater Toronto Area) in July and August 2015.

Jesús “Chucho” Valdés came to the Flato Markham Theatre in Ontario and gave us a history lesson on September 26th 2014. It began with a tale of the Lucumí tradition and finished up where music in the Afro-Cuban-African-American tradition is now. His music came from deep in his soul where Lucumí lurks—from the ancient kingdom of Ulkamo/Ulkami and from Cuba where the surviving elements of the Yorùbá culture resides as does that of the Congo and the Carabalí. Both groups have adapted themselves to predominantly Yorùbá patterns and this was what framed the artistry of the genius of music: Chucho Valdés. 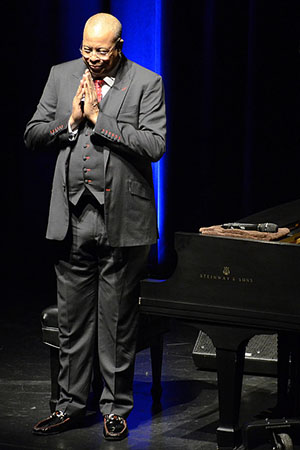 It became clear that in areas of religion and in art—particularly music and specifically in the music of Chucho Valdés, we found the greatest African contribution to Cuban culture. Here Obatalá gave her name to Our Lady of Mercy and Yemayá, the powerful goddess that became Our Lady of Regla… Yes, this was heard all through the night, especially in Mr. Valdés’ monumental composition, “Mambo Influenciado” and in the arousing bolero “Esta Tarde Ví Llover” by the Mexican pianist Armando Manzanero , which Mr. Valdés made entirely his own as he poured molten Afro-Cuban rhythms into the bubbling idioms of jazz. These were repeated in the dazzling ring and vaunted arpeggios of “El Manicero.”

And Lucumí was alive that night as Chucho Valdés made us catch our collective breaths when he launched into Thelonious Monk’s “Blue Monk” first and then into a lightning fast version of John Coltrane’s “Giant Steps.” If there was any doubt as to the marriage of Afro-Cuban music and Jazz then these two charts dispelled all doubts. Chucho Valdés did not stop there. He became his father, Bebo, but with a singular voice all of his own. In paying tribute to the mambo rooted in “Ritmo Nuevo” and adapting this mambo’s syncopated mode from the danzón structure –as Bebo Valdés did so long ago and as Chucho Valdés continues to take into the rarefied realm with his solo piano works– Chucho Valdés used all of his skill and agility as a pianist to even re-arrange the mighty songs from the American Songbook, such as “Autumn Leaves,” (originally a 1945 French song, “Les feuilles mortes” with music by Hungarian-French composer Joseph Kosma and lyrics by poet Jacques Prévert) “Over The Rainbow” and in a staggeringly beautiful medley that ended in a soaring version of George Gershwin’s “Lisa”.

Throughout the night in two sessions, Chucho Valdés was inspired by the very Lucumí that exist not only in Cuban mythology, but in a very real sense in the hearts and minds of the scores of artists inspired by Mr. Valdés. His tribute to Ochún (the goddess of love, femininity, represented by Nuestra Señora de la Caridad del Cobre, patroness of Cuba) lurked in many songs of his nocturnal repertoire as he made music that was, like Ochún, sensual and roaring like rivers of gold, copper and coral. Mr. Valdés also exhibited his monarchic heritage as the son of one of the greatest Mambo Kings, in his extraordinary “Mambo Influenciado” as we all left, gob-smacked into the cool night, never to be the same after listening to Chucho Valdés.

Photos by Atael Weissman (click on thumbnails to enlarge)