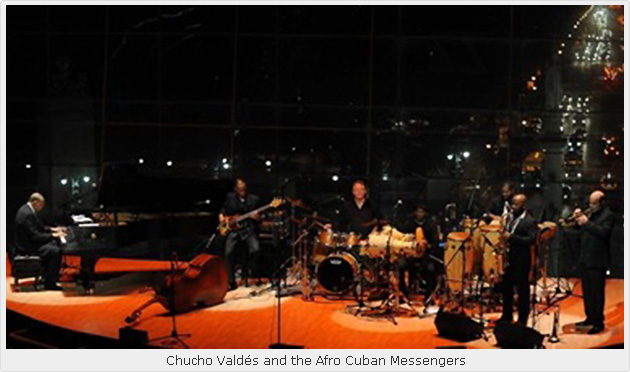 CHUCHO VALDES AND THE AFRO CUBAN MESSENGERS
LIVE AT THE ALLEN ROOM/JAZZ AT LINCOLN CENTER
(October 22nd and 23rd, 2010)

Maestro Chucho Valdés and the Afro Cuban Messengers performed to a full-house at Jazz at Lincoln Center’s Allen Room. The show was part of the institution’s Afro-Cuban celebration, which served to promote cultural and artistic exchange between American and Cuban jazz musicians and culminated in a series of events in Havana, Cuba and New York City.

In addition to his performance schedule, Chucho was eager to premiere Chucho’s Steps (Los Pasos de Chucho), the result of seven years of collaboration and experimentation that stretches the boundaries of Afro Cuban music and jazz. In a recent interview Chucho said, “This is a very unique album. It contains many different things, including traditional (folkloric) Cuban music and Afro Cuban jazz; but there is also Dixieland jazz and African music, all combined into one single form.”

Live, the band stuck closely to material from the new recording, however there were also a few surprises. “New Orleans” (dedicated to the Marsalis family) took the audience on a journey through the Crescent City’s musical history and “Begin to Be Good” (featuring trumpeter Reinaldo Melian Alvarez) recalled Cole Porter’s “Begin the Beguine.” The Afro Cuban Messengers paid a scorching 50 bar tribute to John Coltrane’s Giant Steps then segued into an exciting musical offering for “Chango” (the powerful spirit of thunder and lightning in the Yoruba pantheon). Towards the end of the set the band switched gears and performed a Duke Ellington medley, followed by a tender interpretation of “Embraceable You,” as performed by Chucho and surprise guest, Wynton Marsalis. 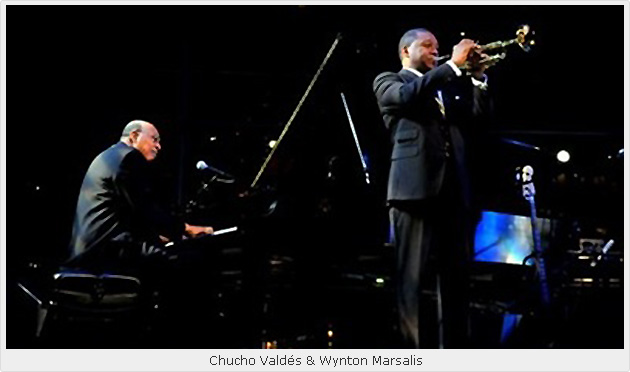 The band received two well-deserved standing ovations and they graciously responded with an impromptu jam session, followed by an upbeat interpretation of a tune by Cuban icon, Silvio Rodriguez.

Chucho is fast approaching seventy but his fingers remain ageless. His commanding presence, improvisational prowess and vision are the driving force that pushes his compatriots to new heights.

The winner of seven Grammy awards and three Latin Grammy awards wrapped up his visit to New York with a performance at the historic Village Vanguard. For those of us who were fortunate enough to witness history in the making, it was an evening to remember.