Andy and Jerry’s: A Tribute to the González Brothers 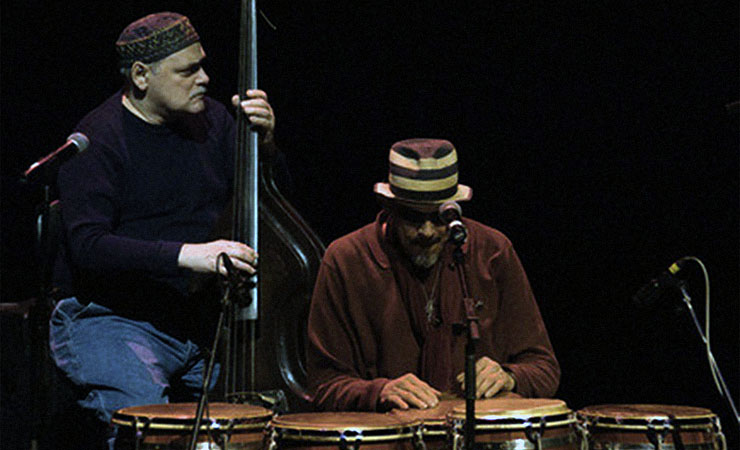 Arturo O’ Farrill, the Afro Latin Jazz Orchestra and guest conductor, Miguel Blanco paid a heartfelt tribute to cultural warriors, Jerry and Andy González at Peter Norton Symphony space, a performance space on New York’s upper West Side. The highly anticipated event was promoted as “Andy and Jerry’s: A Tribute to the González Brothers,” an allusion to Andy and Jerry’s apartment in the Bronx during the 1970s, a place where veteran and second generation, musicians congregated, experimented, participated in rumbas and jam sessions and created the environment for the birth of El Grupo Folklorico Nuevayorquiño, the Fort Apache Band and Conjunto Libre.

O’ Farrill’s relationship with the González brothers, dates back to his early days as a pianist. “When I began to play I rejected my father (Chico O’ Farrill’s) inherited (Cuban) music and culture,” said O’ Farrill, “at the time I was making my name around Manhattan’s downtown loft scene, then a magical thing happened when my father got elderly, I heard our music as if it was new to me.” Andy was instrumental in encouraging O’ Farrill to embrace his culture. “I remember telling him that it was OK to play clave inspired music,” says Andy, “that it was part of him.”

The tribute was presented in two-parts. The first half featured the music of the Fort Apache band as interpreted by the Afro Latin Jazz Orchestra, tunes such as Pedro Flores’s Obsesion (Obsession), Thelonious Monk’s Let’s Call This and Larry Willis’s Isabel the Liberator and Nightfall. Fort Apache is the product of Jerry’s vision, a mixture of progressive jazz and Latin (Afro Caribbean) music, or as musicologist René López describes the band, “the only group that sounds like a jazz group, and never stops sounding Latin.” The Fort Apache Band figured prominently in the film, Calle 54 and is the recipient of numerous awards, including the World Beat Group of the Year in Downbeat’s Annual Reader’s Poll and the Grand Prix of the French Academie du Jazz.

Jerry, looking dapper in a suit, matching hat and trademark sunglasses was front-and-center throughout the presentation, alternating between the trumpet, the flugelhorn and five congas. Andy joined the orchestra for Vieques, an original composition that navigates Afro Puerto Rican and Afro Cuban rhythms and took a deep, thoughtful solo that clearly demonstrates why he is considered one of the most recorded and respected bassists in Latin music.

The second-half featured the music of Conjunto Libre; a dance band that integrates traditional Latin rhythms with alternative influences and embodies the spirit of its former leader and founder, Manny Oquendo. Vocalists Quique González, bass player and former Libre alumni vocalist Jorge Maldonado and flutist Dave Valentín joined the orchestra for a medley Libre’s “flag wavers,” including Alabanciosa, Que Humanidad and Freddie Hubbard’s Little Sunflower. Andy passed the baton to bass player Luques Curtis (of the Curtis Brothers) and sat in on coro (chorus). Libre’s music electrified the room, beckoned the dancers and had the entire audience clapping to the beat of the clave.

In addition to directing the orchestra and hosting the event, O’ Farrill composed a piece dedicated to Jerry and Andy’s parents, titled Fanny and Oscar. Guest conductor, Miguel Blanco, contributed two compositions, “Alma Vacía” and “Gnossienne 3,” featuring the soulful vocals and saxophone of Antonio Lizana. Blanco is the leader of the Afrodisian Orchestra, a big band founded in Madrid. In 2007 he collaborated with Jerry on the landmark recording, Music for Big Band, which has yet to be released in the U.S.

On a more serious note, the tribute could not have occurred at a more appropriate time. Earlier this year the National Academy of Recording Arts and Sciences (the Grammys) eliminated the Latin jazz category, causing a firestorm throughout the Latin music community. Tributes such as this fly in the face of those who seek to undermine the majesty of the genre and the artists who create it. As events continue to unfold we celebrate the lives and music of Jerry and Andy González, two artists who symbolize dedication, passion, risk, artistic integrity and respect for tradition and innovation.

The show ended with the Afro Latin Jazz Orchestra’s scorching interpretation of Tito Puente’s “Para Los Rumberos” and some words of wisdom from Arturo O’ Farril, “This music does not die, it lives in on our hearts and you can take it with you in your soul.”

THE AFRO LATIN JAZZ ORCHESTRA IS:

The Afro Latin Jazz Alliance (ALJA) is dedicated to preserving the music and heritage of big band Latin jazz, supporting its performance for new audiences, and educating young people in the understanding and performance of this important cultural treasure. The Alliance maintains a world-class collection of Latin jazz musical scores and recordings, provides institutional support for the Afro Latin Jazz Orchestra, and provides education programs for young musicians and new audiences.