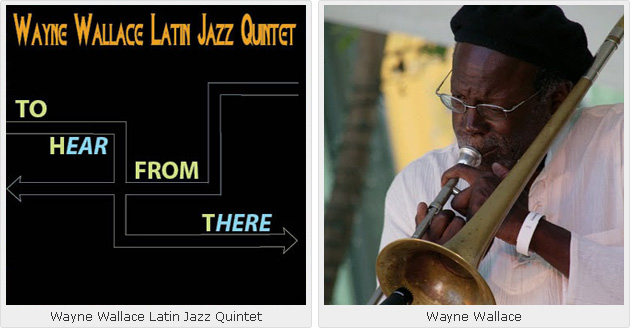 Trombonist, Wayne Wallace is very probably one of the most melodic players on his instrument. And although he might inhabit a somewhat narrow range—eschewing the very high register—he is also one of the most expressive trombone players today. His husky tone is one of a kind and gives his playing tremendous character. Moreover, he is one of the few players who comfortable in virtually every idiom and this is something unique as it enables him to extend his playing with subtle changes in rhythmic accents and phrasing. As someone who loves simply to dance around the melody of the songs he plays interminably he is able to create a seemingly endless stream of linear inventions around the melodic lines. He darts ahead and draws down as he plays behind the melody at other times and his variations are full of unparalleled surprise throughout.

On his celebrated album, To Hear From There (Patois Records – 2011 – Kate Smith Productions/Braithwaite & Katz Communications) Wallace leads his extraordinary quintet on a superlative musical journey through the lively waters of the Afro-Caribbean ocean often raising the harmonic bar several notches with the help of the incredible pianist, Murray Low, who appears to have the energy and invention that is every match for the trombonist. It is an almost mystical union of souls and almost every song bursts with the elasticity and unforgettable engagements that trombonist and pianist brings to bear on the music as they pursue each other from chorus to chorus. Low also has that elusive rhythmic sense, what is known in Afro-Caribbean music as “tumbao” with a left hand that electrifies the rhythms of “son” as he ebbs and flows through songs like “IBebo Ya Llego!” as well as in the thick fluidity of “Descarga En Blue”.

The character of the music on charts such as “Ogguere (Soul of the Earth)” and “Yemaya (The Seven Seas)” also suggests the absolute reverence with which Wallace approaches his music. In many respects that belies a deep connection with his African roots. There is also a ground swell of emotion in Wallace’s playing that caps the sensuous and dancing tone that seems to emerge from a deeply aching or joyous soul that simmers when playing JJ Johnson’s beautiful “Lament” and leaps ecstatically on songs like “La Escuela” and “Serafina Del Caribe”. His mood draws in the other players like a gilt-edged magnet and thus the percussionists, Paul van Wageningen and Michael Spiro shine as does the sinewy bass of David Bedlove. Vocalist, Kenny Washington lights up the eternal beauty of Juan Tizol’s “Perdido” and makes it quite his own as does that force of nature, vocalist Bobi Cespedes, who also ignites the lyrics of “The Peanut Vendor (El Manicero),” which has been done so often yet is made new on this album. Wayne Wallace has earned many accolades for this album and judging by the performance all are richly deserved.

[audio:http://www.latinjazznet.com/audio/jukebox/04-2011/Wayne Wallace – Los Gatos.mp3|titles=Los Gatos – From the CD “To Hear From There”]

Wayne Wallace on the web: www.walacomusic.com