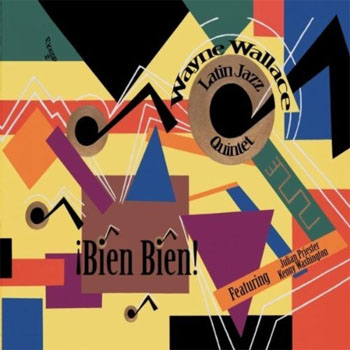 The music with clave that began with Machito’s “Tanga,” and George Russell’s “Cubana-Be Cubana-Bop” has come a long way. With clave in his soul, trombonist Wayne Wallace proves yet again on his record Bien Bien! that the cheer of the music is truly infectious. Wallace is rare among musicians who can “swing” as well as he can “clave.” He has that and all kinds of shuffle rhythms and backbeats bubbling under the skin. This is why he can produce such glorious music even with just a few notes on his ‘bone and this record is full of it.

On Bien Bien! Wayne Wallace has made several outstanding things happen. First, he employs two trombonists other than himself -Julian Priester and Dave Martell. There are no saxophones or trumpets and they are not missed at all. Vocalists Kenny Washington and Orlando Torriente share English and Spanish honors on one track. Between Paul van Wageningen on drums and Michael Spiro, there appears to be a whole percussion orchestra. Pianist, Murray Lowe brilliantly explores the rhythms hidden in the melodies, with bassist David Belove thumping the strings behind and in front of him every so often.

Bien Bien! is a cheerful package -at least until the eighth track- because throughout, Wallace employes his characteristic swaggering tone. He is also joined in the festivities by Priester and Martell. Moreover, the trombone is that kind of instrument that can sound languid and sexy. It is also the most naturally human voice-like of instruments in the woodwinds family. Wallace, Priester and Martell have a fine time playing this characteristic to the max. Then the songs: On “Freedom Jazz Dance” Torriente and Washington, mimic the “baile” with superb rap and corazon. Julian Priester purrs softly like a jaguar on his part of the solo on both “Building Bridges” and “Going Up.” In addition, he growls with a mighty swell on both tracks. Dave Martell is comparatively lively -a leaping gazelle to Priester’s cat. Wallace, of course, is soulful and complete throughout -especially on “In A Sentimental Mood.” “Mojito Café” is characteristic of the sublime rhythm of the record throughout.

“Africa” alone makes this record worthwhile. Wallace’s wailing arrangement also features a slow build up of percussion to a thunderous low -with the bass kicking in mightily, followed by bright splashes of cymbals. The song -as Coltrane conceived it, is a musical journey from slavery to freedom. Wallace inspired interpretation adds to trombone literature. The wistfullness of the trombone as it breaks down the mournful episode of slavery to the eventual triumph of freedom is poignant and unforgettable. The overall crunching rhythm of the song mimics the many oars and chains that once helped sail those ancient ships to America. Best of all, the sharp contrast of this version to the original that Coltrane and Eric Dolphy created -no brass and only trombones here- is remarkable and fresh. On the merits of “Africa” alone, the record represents a high point for Wayne Wallace.

Wayne Wallace on the web: www.walacomusic.com