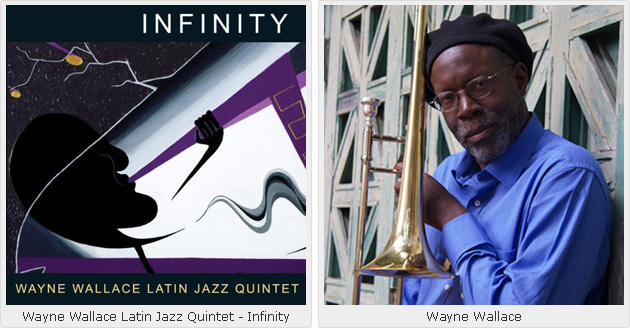 The attempt to make a thoughtful album and one that is supremely entertaining and musically superlative is perhaps one of the most daunting tasks that a musician can undertake. To find this in an album is rare and that is what makes Infinity by the Wayne Wallace Latin Jazz Quintet so much of an event that just cannot be ignored. It is usually a challenge to even explain the context of the word and phenomenon of “infinity” even for mathematically inclined people. For an artist it is even more rare to find precisely what this could mean. The temptation is always to veer towards the abstract and that is not the best way to present a musical expedition – especially as musical notes have finite pitch, tones and terminal values.

But Wallace appears to have found the exact center of the word “infinity” in meaning context and expression. The fact that he plays a trombone and that too with such unbridled genius, of course, gives him a head start. And then to discover, with Pablo Neruda, that “…everything alive has two sides/a word is one wing of silence/fire has its cold half/I love you in order to begin to love you/to start infinity again…” This is almost magical intuition. Moreover to find the sound of the past that we have never got to hear, but to find in its echoes a place for the sound of this Latin Jazz Quintet as it traverses through time and sound landscapes…with what the Brazilian world (at least) would describe as “alegria”… This too is rare and unforgettable and ingenious.

Wayne Wallace has chosen to show the connectivity of the ancient with the modern in an unbroken rhythmic line from African elements in Latin music to the American invention of jazz. Many scholars have explored this with clever theses. Many musicians also have undertaken the journey with fine results. Wallace surpasses most of them. His music is both played and recorded with a view to effect the excitement of a live performance. So even though the music may be carefully selected to pay tribute to the major idiomatic types of old and new Latin musical forms, each of these songs appears to have been performed for a very real “live” audience that has been explicitly imagined.

It is impossible to listen to the title track or “Songo Colorado,” “As Cores da Menina,” and “Cha-Cha de Alegria” without an unconscious heave of the shoulders or getting up and impulsively and with great flourish to samba or salsa. Wallace’s trombone chops are masterly throughout. But not only that, Michael Spiro sounds like a percussion ensemble every time he sets out to lay down the rhythmic lines with his rapid fire timbales, quirky cuica and rounded guiro, and also with sensuous chekere and grand excursions on the batá and conga. His solos on “Infinity” and “Songo Colorado” in particular are absolutely unforgettable. Paul van Wageningen on regular traps provides exquisite harmonic coverage. David Belove can make his bass sensual too as he plucks and slaps his way to conjuring up a string section on his own. Roger Glenn on flute and on vibes is simply marvelous. Special mention is also due for all the vocalists, especially Orlando Torriente and Jackie Ryan, who is a perfect foil for the breathy sound of the trombone.

Oddly enough the high point of the record may be the perfect vehicle for the trombone – the wonderfully mournful version of “Memories of You,” correctly attributed to Eubie Blake and Andy Razaf in the credits. And even though Wallace mistakenly attributes to “Fats” Waller in his notes to the song, this is only a minor blimp in an otherwise perfect package.