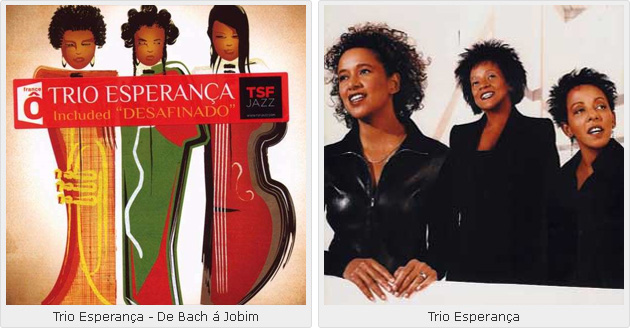 There is a rare and celestial beauty that pervades throughout De Bach &#225 Jobim, the album by the legendary a capella Brasilian group, Trio Esperan&#231a who share a very special connection with the 10-voice ensemble, Grupo Vocal Desandann. Both ensembles use the oldest instrument known to human kind in intricate harmonies that have a spirit connection seemingly as old as the Psalms of David. However, from the historical perspective, Trio Esperan&#231a first made musical waves in 1958, releasing their first album, N&#243 Somos o Sucesso, then becoming an integral part of Bossa Nova and the celebrated Musica Popular Brasileira tropicalisimo movement.

However unlike Desandann, which remains principally rooted in Afro-Haitian spiritual verve, Trio Esperan&#231a have broadened the scope of their music to include classical music from several eras—from baroque to the Beatles—melding it with the Brasilian to produce a burnished music that swells with sensuousness and gushes in waves of mighty Amazonian splendour.

De Bach &#225 Jobim recorded after a span of five years since Bis-Jovem Guarda (EMI, 2006), is short, but features a powerful repertoire that spans 400 years—literally—from arias written based on suites and a cantata by Johann Sebastian Bach to classic charts by Jobim, an eternal song by Chico Buarque, “Joana Francesca” and a couple of Beatles favourites. “Penny Lane” has been rendered in Portuguese and is tinged with sadness. It melds the story of the Beatles original with the melancholy of chorinho with the splendour of a baroque choir. “Blackbird” is sung a Capella, in English, one of three or four languages that the group sings in. Both are masterful versions of songs that once defined popular culture. Here lies the rub. What sets Trio Esperan&#231a apart from any a Capella ensemble today is that they slide perfectly into popular culture today as they once did with Bossa Nova and MPB.

With contralto, mezzo soprano and soprano voicings the ladies of Trio Esperan&#231a direct their intakes of breath with such wonder that they are able to hang on to notes and make them vibrate with tremulous wonder. They do so on a superb version of “Joana Francesca” and “Romaria” and when they are joined on the surprise hidden track by their brother, Mario, which quotes freely from Puccini’s Turandot in a memorable manner.

The arrangements on this album are the sublime handiwork of Eva Corr&#234a’s husband and the group pianist, G&#233rard Gambus. The production is masterful, with the viol&#227o of Marcio Faraco just where it should be, weaving a musical tapestry in and out of the heavenly voices of Trio Esperan&#231 as they guide the wide-eyed and the breathless on a memorable musical journey from Bach to Jobim.

Trio Esperança on the web: www.facebook.com/pages/Trio-Esperanca/