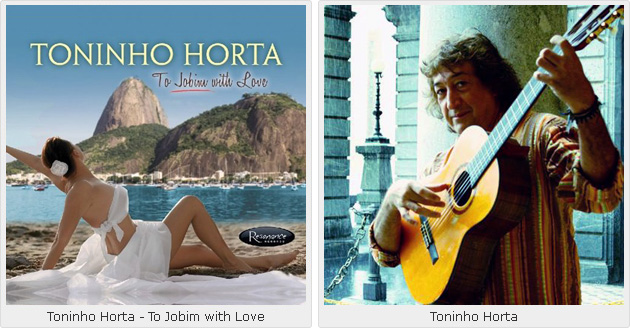 This record was released to coincide with the 50th Anniversary of the Bossa Nova. How appropriate that it should be a collection of songs (except for two tracks) composed and played by the immortal Tom Jobim. How much more appropriate is it that the record should be titled To Jobim with Love? Of course all that would come to naught if the record fell below expectation. But that would be so far from the truth that it would seem ridiculous to even to speculate as such. For this tribute to Antonio Brasilero—as well as to Brasil and its astounding music itself—is probably one of the most lavishly appropriate productions in recent memory. And there have been a few ever since Tom Jobim passed away.

What makes this record stand out is the fact that it captures something Jobim was so well-known for and that was his extraordinary art for intricate harmonic coloring, undulating and subtly shifting rhythms, timbral ingenuity and of course his ability to, every once and awhile, spring a melodic surprise. For Jobim sometimes incorporated a hidden chorinho, or a gentle samba or any such motif that brought not just quickened the step in a dance, but also brought a visible, palpable smile to the lyric. Or he could squeeze a tear from a dry eye when he was lamenting with just a subtle minor variation. Here Toninho Horta employs all of his musical skills to bring Jobim’s music to life with gorgeous arrangements and eerily similar delivery of the lyric—sometimes wordlessly—just the way Jobim used to.

As a vocalist Toninho Horta shows his sublime artistry time and again throughout the record—whether he is singing the lyric straight, as in “Desafinado” or harmonizing wordlessly as in “Modinha.” In both cases he exhibits an uncanny grasp of the emotion and his phrasing is absolutely flawless throughout. But then nothing less is expected from this extraordinary musician. Horta is also a formidable guitarist with such a fine command over dynamics that he is almost able to make his solos breathe like his vocals. Whether he is playing acoustic, electric or even the classical flamenco guitar he exhibits such a high degree of technical virtuosity that his reputation as a musician may stand on his instrumental ability alone.

And then there is the ensemble that supports Horta on this wonderful project. Bob Mintzer appears to be an inspired choice for the tenor saxophone colors throughout—almost reminiscent of that spectacular tenor saxophone playing by Joe Henderson on his tribute to Jobim, Double Rainbow as well as on Jobim’s last record—Antonio Carlos Jobim and Friends—the one produced by Oscar Castro-Neves and Richard Seidel and recorded in September of 1993, not long before the maestro’s death. Gary Peacock’s exquisite play especially on “No More Blues” and “Desafinado” is utterly memorable. Gal Costa is also an inspired choice for “No More Blues” and “Modinha.” But the true star is the ensemble itself under the direction of Toninho Horta, who like the true master that he is, conducts this project to absolute perfection.

Tracks: Agua de Beber; Portrait in Black and White; If Everyone Was like You (Se Todos Fossem Iguais a Voce); From Ton to Tom (Silent Song); Cristiana; Meditation (Meditacao); No More Blues (Chega de Saudade); Infinite Love; Promises I Made (Promessas Que Eu Fiz); Modinha; The Girl from Ipanema – Vignette; Without You (Sem Voce); Desafinado.

Toninho Horta on the web: www.myspace.com/toninhohorta