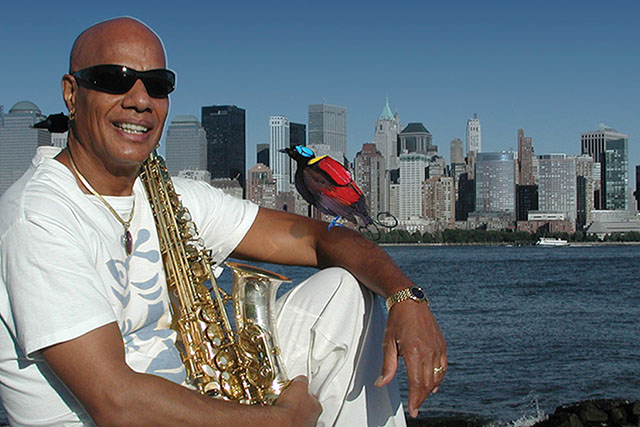 The hypothesis that in Charlie “Bird” Parker’s music the cultures of the world collided may be new, even unheard of until now. The elemental polyrhythms of Africa were melded into the folk forms of America and both were glorified in the polyphony of European music as Bird soared. The alto saxophonist wrote and played like a pianist; sang like a choir of angels and broke endless boundaries creating a music so timeless and elastic that it will, no doubt, live forever, or at least for a very, very long time like that of the great composers from Haydn, Beethoven and Mozart to Bartok, Stravinsky, Ellington, Mingus, Nichols and Monk. No one can play like Bird, yet his music is open to interpretation. The monumental recreations of Bird’s (and Monk’s) music by Heiner Stadler performed by Thad Jones, George Lewis, Stanley Cowell and others in the early seventies were spectacularly modern, challenging even the then freewheeling tenets of contemporary European music. And of course, musicians playing in the Afro-Caribbean idiom have also had the gumption to attempt to re-interpret Bird’s complex harmonies and rhythms. 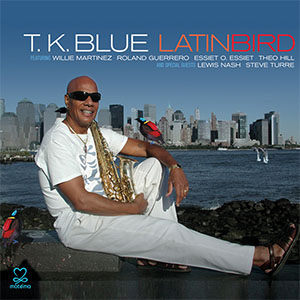 The latest tribute comes from no less a figure than T.K. Blue (also known as Talib Kibwe), an alumnus of some of the finest ensembles led by the great Randy Weston. So, schooled in the African idiom, T.K. Blue now takes Bird on an Afro-Caribbean adventure with Latin Bird, an ambitious homage to a musical place Bird sometimes revealed he was also in love with, playing in a large ensemble with Dizzy Gillespie and Machito. However, this album is a much more elaborate adventure. Here T.K. takes some of the most sacred Bird pieces and attempts to—for want of a better word—Latinize them. To pull this off not only requires sublime technique and virtuosity, but also great musical instinct combined with a sustained creative rush to the head, a suicidal streak to dare to defy the gravitational pull of Bird copycats, and of course a great cast of band mates. Fortunately all this comes together in T.K.Blue, who also had the good fortune of bringing together a stellar ensemble—including one of the finest rhythm colorists in drummer, Willie Martínez and Latin percussionist, Roland Guerrero, presided over by a bassist who is too often ignored even by some cognoscenti—Essiet Okon Essiet, who is as supreme a melodist as he is a rhythmic player.

Picking a repertoire of Bird’s blues is also inspired as if anything can universalize Bird—as well as set him apart from any other great composer—it is his absolutely authentic feeling for the blues. T.K does have a near-miss on the opening chart, “Chi Chi” but, egged on by his superb ensemble he recovers in the blink of the eye. The near-miss is only because the melding of the African and the Caribbean appears somewhat separated and contrived (in the most honest sense of the word). But T.K Blue’s spectacular turn as an arranger of Afro Caribbean music is beyond reproach from “Sí Sí” on. The latter chart begins with in the sublime realm of bebop and swings and shuffles its way in the Latin meters so perfectly it is breathtaking to the ear. Monk’s “Round Midnight” is flawless, but it is Bird’s classic “Donna Lee” that is the album’s crowning glory, shuffling from a danzón to the wild swing of bebop, waltzing its way to a great Viennese hallway before colliding with a masterful samba that then breaks down into the most spectacular African blues.

Any musician wanting to Latinize Bird’s repertoire following this wonderful album is going to have to literally pull a rabbit out of a hat, but with an outstanding performance on alto saxophone and flute, perhaps the “hardest act to follow” is going to be for T.K. Blue himself.

T.K. Blue, also known as Talib Kibwe, was born in New York City of a Trinidadian mother and Jamaican father. T.K. began playing music at the age of 8 years old on trumpet. After two years his interest shifted to academic and athletic endeavors… He returned to his musical studies in High School while playing the flute. Read more…