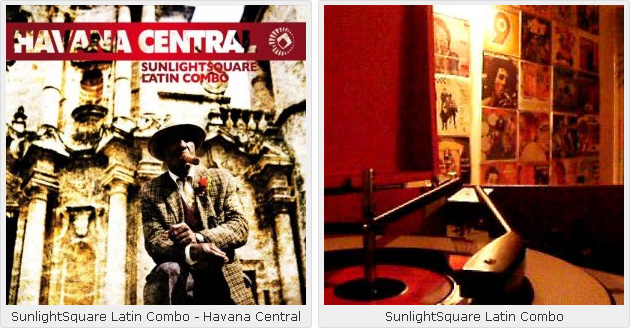 Just how contagious is the music of Cuba? It has spread far and wide in a veritable pandemic. It is no longer an underground thing, something the Brits love to call any music that is not conventional rock and pop (how inane those monikers now sound). The seismic activity that comes from SunlightSquare Latin Combo on Havana Central was in fact a cracking session that the ensemble recorded over on the sunshine isle—no not Her Majesty’s territories at all, but Che’s and Fidel’s. There can be no doubt that a Brit combo like SLC would have been transformed by the flights of musical fancy that they collided with in Havana. The evidence is in the swaggering music that is steamy and innovative from end to end.

There is something truly magical about this session, something too many expat musicians miss when delving into their passions—but not in this case, with Italian-born keyboard artist, Claudio Passavanti. The missing piece in too many American and Canadian adventures is the tres, a four-stringed, shrill guitar derivative. This instrument is native to Cuba and very different from guitar derivatives across South America—for instance, the viola&#245 in Brazil and the charango in Peru. The tres is double-stringed and tuned in 2nd inversions of C or D chords. It is played rhythmically with melodic lines and chords are rarely strummed, but the tres strengthens the melodic line in a 3rd or 6th above with rhythmic fills in between. There are a few examples of virtuoso playing, but the finest on the record is heard on “Toca Otra Vez.” This is a dramatic coo-down after a particularly heated and wound up set and the elegiac drama of tres and piano is beautifully intertwined towards the middle of the piece.

The other dramatic event on this album is the sublimely graceful melding of instruments—including the brass and woodwinds—with percussion and keyboards. This is true Cubanissimo style playing, where the son muntono is classically suave and almost like velvet snuggling up to silk. For that the inspiration must come from the meeting of minds—Passavanti’s and the Cuban contingent led by “Toni” Rodriguez. And why there has not been more son and bolero with the gravitas of the Hammond B3 will remain a mystery. This is just as the magic of the Hammond B3 is unlocked by Passavanti for this project.

A final memorable element of the music is its harmonic richness throughout. “Bebidas Para Ti, Ron Para Mi,” “Asi Toda La Vida” and “Teardrop” are fine examples of how vertical embellishments can be contrapuntally arranged and performed in a manner so like the magical; double-helix that they become almost unforgettable. This music echoes long after the final musical notes have faded into the past, thanks to these organically interwoven devices.