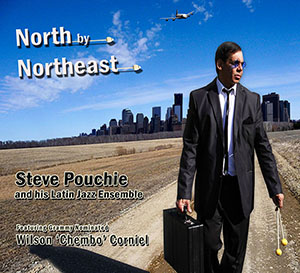 This album, North by Northeast is an infinitely sophisticated recording, full of romantic allusions from literature and film. If it suggests Alfred Hitchcock, it is because it abounds in mystery and magic. This is not usually the case with Steve Pouchie, but here he has expanded his vision and therefore the horizons of his music to reach as far as the eye can see. He has cultivated a certain jazz-like charm that is rare even for Latin Jazz practitioners including those who are more recognised than he is. Mr. Pouchie is also vastly different from most vibraphonists in terms his rhythmic attack–he is more immediate–and his musical sensibility is different. But Mr. Pouchie is also a renowned vibraphone player who uses two mallets. But unlike the two mallet players, he is able to play harmonies when he decides to. And this is what makes him also very interesting to listen to like Gary Burton and Warren Wolf. He is also an extremely intellectual rhythmist who is more inclined to use a palette that resembles resonating water colour-like imagery in his sound design. This makes him extremely enchanting and also somewhat mysterious as he couches his notes in noir-like vibrations with an ever-so-slightly longer sustain not only at the end of his lines but sometimes in the middle of them as well. Thus his work almost always gravitates to a dusky atmosphere where interesting musical sprites roam and make his sonic tales as mystical as ever too.

This album comes to life right from its very beginning. It leaps with the ebullient music of congas and horns, vibraphone and bass. The spectacular mood seems to rise as the music progresses. Much of this has to do with the superb arrangements on the recording. They are by far the most stylish that Mr. Pouchie has done to date. Here he shows great imagination and makes each note count. Moreover he has made interesting use of the instruments, especially the keyboards that have contributed to an almost string-like sound. When coupled with reeds and his own vibraphone this produces a most interesting sound, which is reminiscent of some of the finest work that Cal Tjader once did. Much of this kind of work is done on “Cuban Chant”. But there are other fine arrangements on the record as well. For instance, “Frenesi Cha-Cha” is superb in its split-rhythms that make the melody a lot more mystifying and beautiful too. Also the unique and tangy harmonic language throughout the album is quite inimitable. The vibraphonist’s approach is more energised than his last outing. But it is not until the slower songs start that the wonderfully introspective opportunities arise for everyone to become more languid in their approach to the harmonies. This has a memorable effect on the music of the album.

Much is expected of Steve Pouchie. This album seems to have become that kind of benchmark for him to exceed if he is to maintain a reputation for excellence; something that has become his hallmark throughout his career.