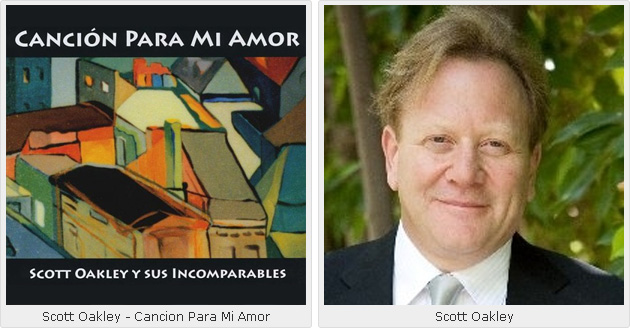 How many times has this happened before? A jazz musician – and a very good one, at that – becomes seduced by the music of Cuba (and Latin America). Musicians from Bird and Dizzy to Archie Shepp were… This magnificent obsession continues unabated and is in flood today. A few, such as Toots Thielemans, Hendrick Meurkens, Jane Bunnett and Larry Cramer, and Steve Coleman among others have also made some fine records where, literally, cultures collide and the music here is raw and emotional and invigorating. And once and awhile, a “jazz” musician may throw caution to the winds and make a record such as Bunnett’s Spirits of Havana and Embracing Voices. Scott Oakley’s record is another such endeavor.

Cancion Para Mi Amor is a bold step for the pianist and educator from the West Coast. Oakley has jettisoned his jazz idiom here in favor of a Latin – specifically – a Cuban one. Clearly there is more than admiration for this wondrous music on Oakley’s record, there is a deep love and affection. And this is why the music is accomplished. Oakley has developed more than an understanding for the emotional clave of Cuban “son” and “danzon”. The rhythms have entered his heart and soul and the music now bubbles in his veins and to his fingertips, flowing out on to the keyboard.

His admiration for the conceptions of Cesar “Pupi” Pedroso is clearly what drives his compositional efforts. There is remarkable evidence on “Al Estilo de Cesar “Pupi” Pedroso” and also “Para Pupi”. Oakley also knows his Peruchin well. His Cuban Descarga tracks “Mi Peruchin Descarga #1” and “…Descarga #2” are not only stylistically aligned with Peruchin’s harmonic ideas, but also use his conceptions as on his minor-to-major-note phrases as well. The track, “La Pregunta De Tres Dos” is a fine dissertation on clave, which Oakley deconstructs well, without trying to be too clever.

Oakley also acquits himself admirably on the other tracks, “Eu Procurarei-o Por,” and “Corremos, despues Saltamos,” both well written tracks that take “son” and place it in a modern context. The former also swings madly and also has a quirky middle section with the twist and whine of the cuica. “Cha Cha Cha en Cinco” is another fine excursion in rhythmic complexity. This record would probably be missing a whole lot of sassafras if it were not for the percussive work of Robert Fernandez and Raul Pineda. Bassist, Rigoberto Lopez is also a towering presence as is the ever-elastic horn work of James King. The musicians all play with the same soul that dances in the very depths of their beings.

Scott Oakley on the web: www.scottoakleymusic.com