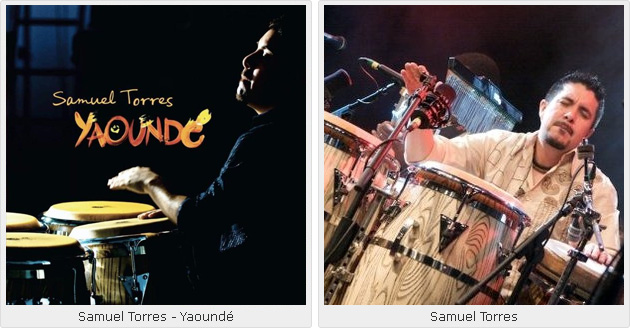 For the spirits to materialise when they are summoned in worship the practice of the worship must reach a level of intensity—get to the blue part of the flame, so to speak—and arouse the angels and God as well to come down and bless the worshippers a million-fold. When David played his harp, so intense was his music that Samuel was inspired to anoint him King. Now it is the turn of another Samuel, not to anoint, but to call up the angels and saints and to placate God to bring peace and happiness and to look kindly upon his people… He calls with deep intensity and does not let up throughout Yaound&#233, a masterful supplication in various parts. The Samuel in question is Samuel Torres, that Colombian percussion colorist, who directs the proceedings and, in doing so, also draws in everyone who hears the echo of the congas and chekere and Llaneras, kalimba and caxixis… And the spirits and Saints, at least, are moved to bless this project.

The magnificent ablutions begin with “Un Atardecer en Cartagena de Indias” and continue through “Oye,” but it is only when the music of “Yaound&#233” heats up that the real entrancement begins. Bassist, John Benitez is superb here as is pianist, Manuel Valera who play in deep sympathy with Torres to make the initial supplication—like the beginning of a Santeria séance. From then on, things are almost trance-like. Torres excels again in his conga master class, “Tumaco” and a sensuous melt down of sorts occurs in the beautiful Bambuco Colombiano, the riveting “Bambuco (To Santa Fe de Bogota). Played in a magnetic meter of 6/8 and creating a hypnotic swagger, Torres revives an old Colombian Polska to cool things down.

Torres’ next agenda is more personal. His music now addresses private blessings and with superb attention to detail he brings the mastery of saxophonist Joel Frahm, brass player, Michael Rodriguez and pianist Manuel Valera together for the next part of the spirit awakening. Here, though Torres directs his music to the blessing of small things—everything that the Lord made. Much of the music is an exaltation of personal relationships. The love of an artist who is concerned about the state of human condition. Torres proves himself to be a very committed artist here.

As a percussionist, Samuel Torres is not classical. His cut and slash is daring and he uses his gnarled palms to make the skins talk. His taps with the tips of his hands and the resonating howl brought forth by cupped palms is astounding. He can make almost vocal insinuations with his various small percussion instruments and his use of the Llaneras and various chekere and caxixis is both votive and melodic. It would be remiss not to mention also the fine addition of Anat Cohen, whose woody, breathtaking round sounds on “Macondo” are short, yet memorable.

Torres has certainly attempted something really ambitious. To the extent that he has managed to maintain the level of energy that is required conducting a sort of ritual prayer and cleansing, this album hold up at most levels. It bears listening over and over again and like the skin of an onion, more meaning is revealed as the music leads the listener closer to the center of its being.

Samuel Torres on the web: www.samueltorres.com