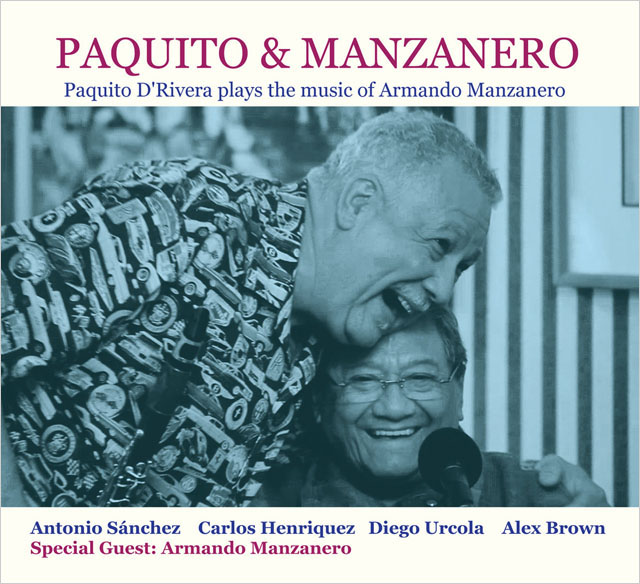 *Editor’s Pick – Album of the month –

Armando Manzanero is 80 years old now. But he has been practicing his craft since the age of fifteen. In the intervening years he has composed over 400 hundred songs, some of these – like Somos Novios – have become iconic and have been covered by many including the great Abbey Lincoln. Moreover, even though he is still with us, he certainly qualifies to be considered a legend. That Paquito D’Rivera, one of music’s greatest protagonists has chosen to make a record as well as pay tribute to Manzanero is both significant and particularly joyous. And what a fine record it is indeed.

Despite the simple title: Paquito & Manzanero, it is hardly a case of presenting Manzanero’s music in order to honour him. Its presentation of short pieces evokes atmospheres of longing, sorrow, joy and nostalgia. Universal themes are at work here, true enough, but the themes aside, there is something on this CD for you to enjoy, discover and identify with.

Both D’Rivera’s and Manzanero’s performances are eloquent. Indeed. Paquito D’Rivera’s voicings are expertly balanced from the first familiar son – Amanecer – onwards and Manzanero’s phrasing and intonation is absolutely exquisite every time he steps in to sing. His lively guest appearance in the tracks to which he contributes his voice is of a very high standard (what else could you expect), delicate and almost otherworldly.

Paquito D’Rivera’s captivating ability to illuminate even the most densely packed musical terrain pays special dividends in Debajo De La Mesa; Mía, which is propelled rather than merely embellished by mystical ripplings and flutterings. Other music is informed by spectral weightlessness. Here the trumpet of Diego Urcola combines with Paquito D’Rivera’s marvellous saxophone, or clarinet, making this feeling absolutely memorable. The trumpeter’s glacial linearity combines well with the saxophonist’s rolling glissandos.

All the musicians respond to the music in rhapsodic manner. Alex Brown is magnificent and so is Antonio Sanchez, as well as the magnificent Carlos Henriquez. But the most unforgettable moments belong to the voice of Armando Manzanero. He sings effortlessly. His voice is soaked in emotion and you can almost hear his heartbeat. Manzanero’s vocals are also devoid of unnecessary sentimentality and yet their poignancy is affecting. This is one collaboration for the history books.