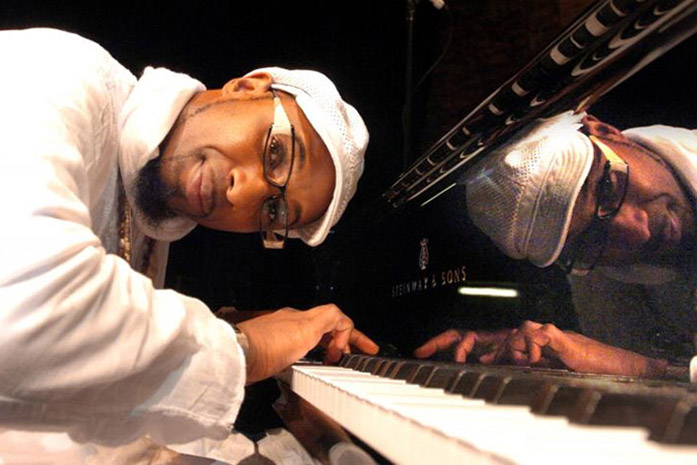 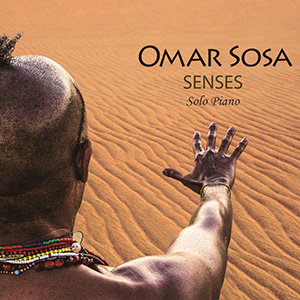 Omar Sosa has not sounded so melancholy, so soulful and so spiritual than he does on Senses, a solo piano record that he has made on the Otá imprint. Mr. Sosa has often made music that has been deeply spiritual and one of the finest examples of this has been his Berlin recording with flutist Mark Weinstein, entitled Tales from the Earth, an album that was recorded extempore and inspired by events including the Kristallnacht and the Holocaust that followed later. This album, Senses is however, much more personal, with songs that pierce his own like proverbial arrows, aimed at causing him to bleed into his music as it flows onto the ebony and ivory of the piano. The record is haunting; the echoes of its music pulsate with every push of the sustaining pedal. Notes hang in the air like teardrops staining the perfect cheeks of the pianist engrossed in pouring his elemental aches out into them via the music that traverses the chambers of his mind en route to his fingertips; and then from there onto the keyboard. Nothing is left out. Nothing is left to the imagination of the listener. Rather the listener becomes a part of that voyage as the pianist pours his heart and soul out into the music.

It is hard to choose examples of this fine music to illustrate what it means to listen to the recording. All that needs be said is that the journey is long and hard and often, as is the case with such existential music, the mood swings are pendulous. There are times, for instance where Mr. Sosa is bathed in bright feelings and sunshine, as in “Sun Shower”. But there is also music that journeys into darkness; into a place so black that the sadness is palpable and thick as the inside of the black hole of depression. Such songs would be “Despacio,” “Lament” and “Olorun”. Here notes are thunderously deep and viscous and hang in the air like great banks of rainclouds that obliterate the azure of the cheerful sky. On the latter, thunderous sounds mark the beginning and end of the piece, ensconced in heavy notes and chords that swirl and settle on the mind like devilish dust from a lonely evening, wrapped by bitterness and sorrow. Even the usual rhythmic suggestion of the otherwise cheerful and statuesque tango is threatened by the black dog of the mind, which seemingly nothing will cure.

Presumably all of this will change at some point in the pianist’s career. Hopefully this will be soon. Omar Sosa is not the kind of person that will be kept hunkered down by such moody feelings. His music will soon rise up and conquer such melancholy and pensive states of mind. When this happens, there will surely be a record of immense cheer and upward feelings. Until then there is this unusual and extremely personal album to enjoy. It was probably—in actual fact—extremely difficult to make such a record. It is hard to bare the soul’s weeping and it takes superhuman strength to overcome doubt and grief. But Mr. Sosa is an extremely gifted musician, a virtuoso of great standing and very spiritual human being and pianist. And whatever he puts his hands to turns out to be exquisite. So also is this music the sadness of which is sometimes almost too much bear.

Composer-pianist-bandleader Omar Sosa was born in 1965 in Camagüey, Cuba’s largest inland city. At age eight, Omar began studying percussion and marimba at the music conservatory in Camagüey; in Havana, as a teenager, he took up piano at the prestigious Escuela Nacional de Música, and completed his formal education at the Instituto Superior de Arte in Havana. Among his influences, Omar cites traditional Afro-Cuban music, European classical composers (including Chopin, Bartok, and Satie), Monk, Coltrane, Parker, Oscar Peterson, Herbie Hancock, Chick Corea, Keith Jarrett, Chucho Valdés, and the pioneering Cuban jazz group Irakere. Moving in 1993 to Ecuador, Omar immersed himself in the folkloric traditions of Esmeraldas, the northwest coast region whose African heritage includes the distinctive marimba tradition. He relocated to the San Francisco Bay Area in 1995, and soon invigorated the Latin jazz scene with his adventurous writing and percussive style. Read more…