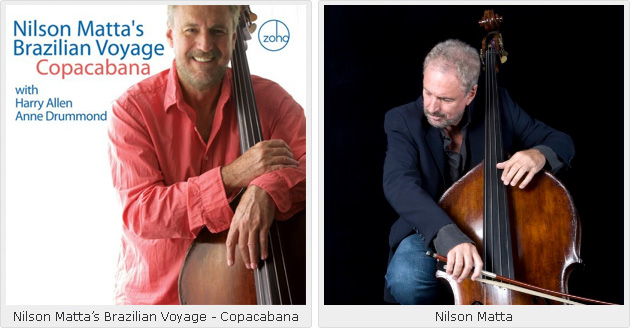 How it is possible that Nilson Matta is allowed to fly so under the proverbial radar, with recognition mainly from his peers is one of those mysteries that music suffers its artists to bear even with the growth of the industry and media. Matta’s bass has been complementing the music of luminaries from Joao Gilberto, Johnny Alf, Hermeto Pascoal and Chico Buarque de Hollanda to Joe Henderson and the legendary Don Pullen with grace and majesty. His career has spanned decades and throughout he has been a musician of immense technical skill and a composer with daring, creative ideas. Copacabana, an album that brings together tenor saxophonist Harry Allen and flutist, Anne Drummond with pianist Klaus Mueller, and Matta’s radiant rhythm section of drummer Mauricio Zottarelli and percussionist Z&#233 Mauricio, is a tour de force of composition and musicianship of the highest order.

Although the title of the album may give the impression that this is a carioca singing sensuously of the myth and reality of Brazil it is much more than that. With five of the nine tracks on this album written by him, Matta guides the ear and the heart gently on a journey of fluttering classicism and the almost mystical dancing that characterizes any expedition through Brazilian countryside. Throughout he has imbued his musical impressions with the sizzle of sun and surf, the sway of dense foliage and the sashaying of feet that samba even as they simply walk through everyday life.

Matta has also shown that he is a master of the craft of composition. His “Aguas Brasileiras,” a superbly crafted piece that ascends rarified air in much the same way as the Cuban classic “Drume Negrita” does. His pizzicato solo shows just how eloquent he can be while putting his technical wizardry through its paces. His elegiac offering to the legendary Brazilian guitarist, Baden Powell, simply entitled, “Baden” has the cry of a soulful ballad even as it elevates the guitarist to sainthood. On “Pantanal” he plays con arco, unaccompanied, as he gently guides the music through the splendor of the Brazil of Amazonia.

It bears mention here that Matta is ever graceful as he interprets Heitor Villa-Lobos’ “Trenzinho do Caipira,” a piece from that composer’s larger work, “Bachianas Brasileiras,” navigating its many twists and turns with a sublime air of sophistication. His version of that other Brazilian classic, Ary Barroso’s “Aquarela do Brasil,” unlike many versions of the piece, sparkles with glitter on the soft textures of Brazilian rhythm as it sways and dances. On Luis Gonzaga and Heitor Teixeira’s “Asa Branca/Bai&#227o Matta guides the ensemble—especially flutist Ann Drummond, who is outstanding here, and the percussionists as well—through the joyful, skipping twists of the eternal melody from one of Brazil’s most sophisticated folk musicians. Harry Allen also contributes a gem of a song, “I Can See Forever”. This is a chart that not only captures the grace and swagger of Brazil’s open vistas, but also shows the great sensitivity of Allen the composer. Predictably, the tenor saxophonist excels with the warmth and splendor of tone and manner on this track.

Nilson Matta has crafted a superb album from end to end. It is an album that ought to resonate, not just with lovers of Brazilian music, but quite simply every note of significant music. As far as celebrating the virtuosity and craftsmanship of one of music’s great bassists, this is another chapter in the ongoing testament of Nilson Matta.

Nilson Matta on the web: www.nilsonmatta.com