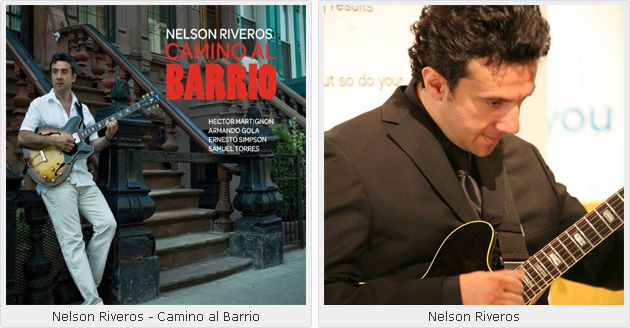 Nelson Riveros is one of the most proficient melodic guitarists inhabiting the world of music today. On top of that he is artful rhythmically. He puts both to use playing largely in the middle and lower registers of his instrument—unusual among guitarists, who, for some reason, prefer the wail of the upper register almost all the time. Riveros also seems in no rush to play a phrase or lick. Consequently his lines are longish and dally deliciously as they navigate voluptuous notes, which wrap around the melody as they harmonise beautifully with it, weaving in and out of the framework of each song. Riveros is also a gifted writer and can easily be a great one as he keeps honing his compositional skills. As it is, he writes short songs with complex melodies and challenging rhythms and he is also capable of arranging these with some degree of counterpoint. Whether this counterpoint will find itself in writing for different instruments—horns, or strings—are left to be seen.

On Camino al Barrio Riveros is joined by the remarkable pianist, Hector Martignon, as co-producer and who assisted in the arrangements of some tracks. Both men perform outstandingly. Riveros is the surprise as he plays with an unexpected fluidity showing none of the jagged edges that sometimes come with debut albums. This is, then a very accomplished piece of work. There is a preponderance of Bossa Nova rhythms and this is especially delightful on Jimmy van Huesen’s “Darn That Dream,” which is less dreamy in the Brasilian rhythm, but has a fine, ironic edge to it that is absent when it is played straight. The Bossa rhythm is the underlying bed for other tracks and overlaid on this could be other, more complex time signatures as well, as on the title track. To make this worthwhile Riveros is aided and abetted by an excellent pair of percussionists: Ernesto Simpson, who dazzles behind the conventional drum set, and Samuel Torres, who plays an assortment of percussion instruments not attached to the regular set.

Riveros is also a sensitive vocalist. He appears somewhat tentative, at first, on “La Puerta,” but soon warms up to the lyrics and delivers a good performance. Hector Martignon and Riveros have stellar solos, back to back, on this track, beautifully arranged by the fine guitarist, David Oquendo, who does not play on this album. Riveros’ version of Cole Porter’s “It’s All Right With Me” is utterly disarming and indicates that the guitarist has much more to offer than merely an understanding of music in Latin American modes. Rather he seems to be well versed in the history of American music, especially in music that made its way to stage and screen in a sort of “golden era” of song writing. The guitarist is also an emotional writer and performer and his heartfelt “Song for Marta” is evidence of this.

For a debut, this is a very accomplished album and it augers well for Riveros’ future work. For one, it will be interesting to see how he might deal with music that is not constrained by the 32-bar format. Writing and playing with strings and horns is another aspect of Riveros’ work that is eagerly awaited. His true talent will probably show then and this is something to look forward to.

Nelson Riveros on the web: www.nelsonriveros.com