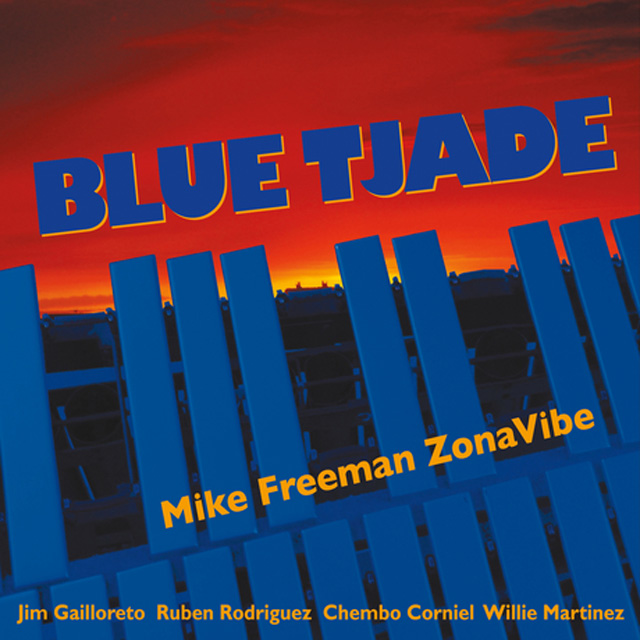 It’s time to give Mike Freeman some respect. Actually it was some time ago. Freeman is a virtuoso mallet percussionist with a bright tone. His playing is redolent of a myriad colours and his touch is light. He is a very expressive player who is capable of being instinctual as well. And he is a fine composer whose work is informed of exciting twists and turns, poise and thoughtfulness. One aspect of Freeman’s playing that he is not often given credit for is his extensive vocabulary and that gives him capability of playing in a wide range of modes and situations. He has, however, chosen to largely follow vibraphone players such as Cal Tjader into Latin Jazz, but he pays tribute to several mentors including Milt Jackson and Bobby Hutcherson here on Blue Tjade.

This homage is enormously impressive. Freeman’s work on this album swings magnificently and ranges from a white-hot volcano of expression to pieces in which he stretches and plays with enormous grace and cool elegance. Over the course of the record, Freeman’s intricate pieces present formidable technical challenges, all of which are surmounted almost with nonchalance, the vibraphonist’s focus resolutely serving the score, not the mechanisms involved in performing these works. He has a particularly rewarding sense of rhythm, high sprung, nimble and incisive, and entirely secure, which pays its way throughout this record. But hearing him navigating through the intricate and improvisations as if they were the most natural things in the world leaves no doubt that he is to be watched, listened to and reckoned with.

In ‘Dance of the Dead’ for instance, Freeman’s playing is exhilarating, extrovert and effortlessly virtuosic. He balances no-hold-barred emotions that are Milt-Jackson-like with sentiments that are all his own. The thrill-a-minute drama of ‘Clockworks’ show off his rock-steady musical instincts. And he seems an ideal match for the wonderful dancing identification with the progression of an unfolding musical narrative in ‘Snow Flake’, an arresting ballad.

This Mike Freeman and ZonaVibe performance often feels like a delicate ballet. It’s because Freeman’s playing is a fully defined interpretation (of the music) that pays dividends in the soaring, fluttering quality of the melodies. And though some of the music was written and played in different settings a long time ago it still feels fresh, as if we were hearing them for the first time. The playing of the ensemble has to it a surging spontaneity and plenty of visceral thrills. The saxophone’s and the percussion articulation of the music with delicate stresses and extended syllables not only sing, but speak, as one would expect of layers of enormous repute. And Freeman can certainly do delicacy.

To complete a wonderfully vivid picture, the recorded sound is radiant, clear and detailed.