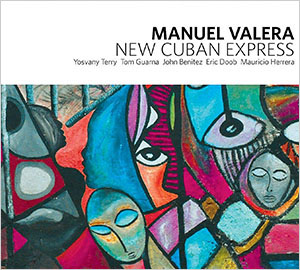 This album, New Cuban Express is Cuban-American pianist, Manuel Valera’s attempt to redefine his relationship with Cuban music including the classic Cuban son and bolero as well as the more popular danzón and rhumba. As a matter of fact, all the music that the pianist has composed for this performance is infused with the spectacular energy and emotion of those forms and is re-imagined in the rhythmic realm of more contemporary music. There is a distinct homage to the so-called fusion of the idioms and improvisational complex architecture of jazz and the more urgent and simplistic rock rhythms. All this is enshrouded in the swagger and melodicism in the bass as well as in the back beat of tumbao. It is in this wonderfully edifying hybrid that Valera and his ensemble is able to expand the vocabulary and language of Afro-Cuban music, brimful with interesting changes in time signatures and abrupt chord changes. 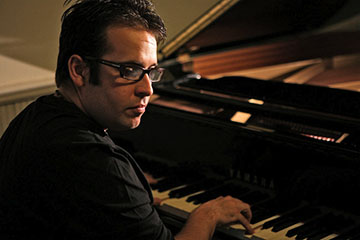 None of these experimental efforts would bear fruit were it not for the fact that Valera owes an enormous debt to his ensemble comprising new star-in-the-making, saxophonist and chékere player extraordinaire, Yosvany Terry, another rising star from Cuba, the ingenious percussion master, Mauricio Herrera as well as the stellar American drummer, Eric Doob. And then there is the great bassist John Benitez, who has graced so many glorious sessions and a relative unknown guitar genius, Tom Guarna. Of course the stewardship of the leader bears special mention. Valera is a sublime technician whose virtuoso pianism is revealed in the extraordinary musicality of his playing, whether he is playing the concert grand or Fender Rhodes or an assortment of keyboards. Although Valera is essentially a melodic thinker, he displays all the signs of classical Cuban tumbao, something that has graced the playing of all great Cuban pianists, from Bebo Valdés and Peruchín, through Emiliano Salvador, Chucho Valdés, Guillermo and Gonzalo Rubalcaba, Roberto Fonseca and others. Moreover, like Rubalcaba and Fonseca and the newly anointed masters such as David Virelles and Aruán Ortiz, Valera plays with seep emotion. His is a soulful sound that seems to sweep out of his heart and not so much his head. His hands appear to be driven by the nervous energy of spiritual leanings and human emotions such as love and affection rather than the programmatic prompts of the proverbial black dots on score-sheets.

The result is beautiful interpretations of such classics as “Me Faltabas Tú” and “Poly” as well as new material that clearly advances the literature of the New Cuban Sound, such as Valera’s own compositions, “Choices” as well as “Gismonteando,” (where he fuses his hot Cuban sound with the Maracatú and frevo that is in obvious homage to the great Brasilian, Egberto Gismonti, and “Cinco Contra Trés,” “Danzón” and “Makuta”. The latter three songs are where the true genius of Valera lies for here he has taken the rhythms of classical Cuban idioms of old music and dance forms and almost completely reinvented them. Much of his efforts would have been in vain, however, were it not for the special qualities of melodicism and harmonic ingenuity that saxophonist and chékere specialist brings to the date. Terry has one of the most fascinating musical imaginations, which has a direct impact on anyone or any music he interprets. Hi ability to lengthen notes, prolonging their specific and singular magic; then creating phrases which leap and bound in interesting elevations and parabolas is absolutely irresistible. On the traditional chékere, he has no equal and he shows off his skills on “Poly” and especially on the brief solo he plays on “Upwards”.

So is the experiment of Manuel Valera and the New Cuban Express a success. In a word, resoundingly, because the sound is both old and spectacularly new in terms of his re-invention of the music of a tradition to which he is inextricably linked. And this increases Valera’s importance as a musician in the arena of Afro-Cuban music.