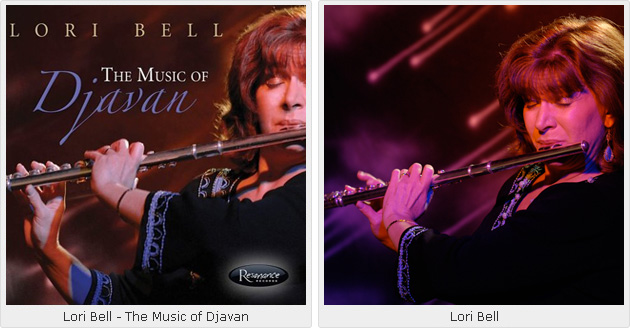 Despite whatever misgivings the producers may have had with regard to this project, namely that that jazz project was centered on the music of Djavan, appears to be misguided. Perhaps Djavan, among the pantheon of Brasilian musicians is least “Jazzy” and more “pop” – a thesis that is somehow incomprehensible and even nonsensical. Perhaps that was why there were misgivings in the first place. But if voices are simply compared – Djavan’s and the voice of the flute – then it is possible to see the supple nature of both. Djavan sings in a high tenor, almost akin to an alto range. His voice appears to float on air. So lithe, in fact is Djavan’s voice that it often resembles the fluttering thermal that lifts the wings of a bird gliding gracefully. Now his music can dart and flit about like an exuberant swallow, and when the need arises it can glide sensuously from in one glissando from down low to way up high.

So how like Djavan’s voice is, in fact, Lori Bell’s flute. It ululates gracefully as it reaches for notes that Djavan has crafted in his music. Bell can swoop down like a bird to capture a dark pensive thought when pondering the elusive missing piece in “Faltando Um Pedaco” or dazzle languorously as the melody uncovers a mystery or two in “A Ilha”. On “Serrado” it is pure virtuosity and emotion. On Liberdade” there appears to me no room to breathe as the air of the song is charged with exuberance. Then there comes the fluttering of magic on “Luz”.

By far the most memorable pieces on the record are the majestic and lyrical “Nobreza” and the absolutely beautiful “Capim” which also includes a sensuous, languorous lyric by Anna Gazolla. “Capim” features Djavan’s trademark gymnastic flights as the lyric leaps octaves even between quarter notes. And both Bell and Gazolla respond with aplomb.
A word about the players on the session: Pianist, Tamir Hendelman appears to have the measure of Brasilian rhythms for even in the subtlest situations “Serrado” he can catch the back-beat and appears to anticipate the inner rhythms like a wizened Brasiliero. The pianist is magnificent on “Nobreza” both in his solo flights as well as in his interplay with Bell. Drummer, Enzo Todesco has also responded with amazing accuracy and he keeps the steady bossa rhythm going while bassist, David Enos undertakes some wonderful flights of fancy.

On “Obi” the quartet is flawless as they traverse the beguiling soundscape created by Djavan in the original piece. This is specially felt in the culmination of the piece where the composer perhaps instructs the players to interpret freely the harmonic swirl that brings the composition to a close. “Canto da Lyra,” is a swinging number that finds its basis in a roistering bossa nova rhythm.

By the end of the record, it is possible to become rather speechless at the pre-production misgivings of the creative team. Granted Djavan was glorified by Manhattan Transfer years ago, but this time round her gets a rousing send up at the hands of one of the finest virtuoso flutists of our time.

Lori Bell on the web: www.loribellflute.com